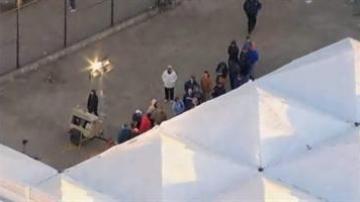 On the East Coast, Election Day was hectic. Sixty-six polling places in New York had to be moved. The governor also signed an executive order, so New Yorkers could vote anywhere.

The East Coast is also preparing for a huge nor'easter.

Nearly a million people are still without power from Superstorm Sandy.

In New Jersey, the state has extended their electronic voting until Friday.

Officials said the response from displaced residents trying to vote by email has overwhelmed their systems.

Sandy knocked out power to nearly 1,000 polling sites. This is one of the nation’s first tests at electronic voting and it's happening unintentionally.