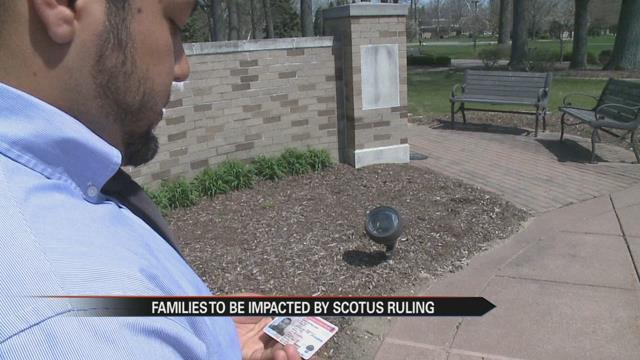 Monday was a big day for immigration reform in the United States. The state of Texas is taking on president Obama’s executive action and taking the case to the nation's highest court.

There are about 85,000 undocumented immigrant in the state of Indiana and thousands in Michiana.

Some of those affected gathered at La Casa de Amistad for a vigil to bring awareness to the limbo they have been living in.

In late 2014 President Obama announced an extension on the Deferred Action for Childhood Arrivals, also known as "DACA."

He also introduced a new program known as "DAPA" which means Deferred Action for Parents of Americans.

Both allowed some unauthorized immigrants to apply for work permits and temporary relief of deportation. Now the Supreme Court will decide if the President is acting constitutionally.

For some this decision could be the difference of living in a more tranquil state.

“There was a lot of excitement I spoke to my parents I said look there is this great program you will be able to obtain a license you can apply to regular jobs,” says Juan Constantino who is a senior at Holy Cross College.

Constantino explains the joy he and his family felt when President Obama announced the Deferred Action for Parents of Americans, DACA. That joy was short lived.

“Once the lawsuit came about that really stopped the whole process and put it to a halt. Now it’s a constant check in,” says Constantino.

Constantino came to the United States from Mexico when he was four years old. Poverty and education were driving factors for his family.

“I’ll be the first in my family to graduate. I’m first generation so she [my mom] is very proud, very excited knowing it’s coming up in a few weeks,” says Constantino.

Constantino is not a U.S. citizen and could not apply for financial aid in 2012 when he was about to graduate from high school.

That same year, DACA was put into place. The program opened doors for Constantino to achieve the dreams he and his parents set years ago.

“DAPA and DACA aren’t programs you can get automatically you have to qualify for them,” says Rodolfo Monterrosa am Immigration Attorney in South Bend.

Monterrosa says in order to apply you cannot have a criminal background. He adds the programs do not grant residency.

“It gives them [unauthorized immigrants] the security of being able to remain with their children and continue to provide from them,” says Monterrosa.

So now Constantino who has benefited from DACA hopes the Supreme Court will rule in favor of the United States and give his parents a chance to benefit from DAPA.

Even if the relief is not a permanent fix at least it will alleviate fear temporarily.

Constantino knows the Supreme Court’s decision will take a couple months but after being in the United States for 18 years says two more months is nothing.

Attorney Monterrosa says the lengthy process is the nature of our legal system.