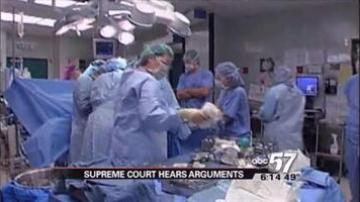 On Monday, the bitter battle over health care reached the Supreme Court!

The law requires every American to buy health insurance by 2014 or pay a penalty.

The question for the Supreme Court: Is that mandate Constitutional?

Right now, Americans are deeply divided on the issue!

"I really believe it's something the government has the power to regulate."

"It will bankrupt our country, it's an assault on our freedom."

Monday's Supreme Court session was the first of three.

A recent ABC News poll found that two-thirds of Americans are against the health care law.

Up next on World News with Diane Sawyer, decoding the justices' hints and what it means for you!