Supreme Court takes no action so far on same-sex marriage 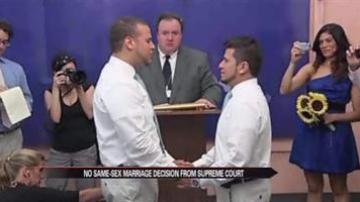 It may be several days before the Supreme Court announces whether it will take up cases about same-sex marriage.

An announcement could have been made as early as Monday, but it may be Friday before anything is said.

The court considered several issues last week. Those possible cases include a challenge to Proposition 8 in California.