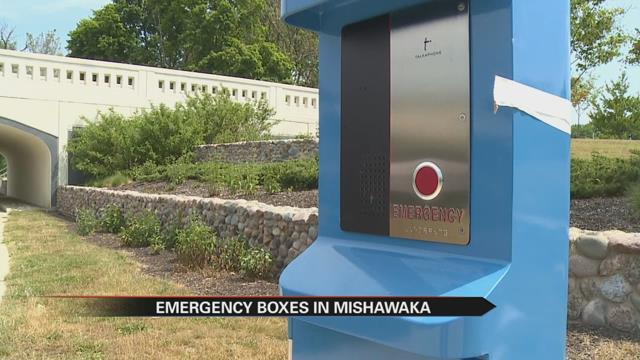 After years of planning and hundreds of thousands of dollars, emergency call boxes and surveillance cameras are being installed in some of the Mishawaka parks.

While the crime in the parks is already low, Mishawaka Police say the added technology is a preventative measure to keep the area safe and families feeling secure.

The city is in the process of installing around thirty cameras and five emergency call boxes.

The Riverwalk, Lincoln Park, Merrifield Park, Central Park and Battell Park will each have one call box. The call boxes will be active 24/7 with a button that directly connects you to a 911 dispatcher.

For South Bend resident Toni Severns, that security is worth the drive to the neighboring city of Mishawaka.

Severs walks the Riverwalk alone almost every night during the summer. She says safety is always on her mind.

“Personally I’m handicapped so I’m not a fast walker and I’m not a runner. If somebody comes up behind me what do I do?” said Severns.

“You should be able to come to the parks and relax and have a good time and not really worry about other things,” said Chief Witkowski.

The cameras are spread out across the park and provide officers real-time surveillance of the area.

Chief Witkowski says the cameras will likely deter criminals, but if not, law enforcement will have a better chance locating and identifying them.

In addition to deterring crime, Chief Witkowski says the health benefits are enormous.

He says many runners and walkers along the Riverwalk don’t carry their cell phones.

If they ever experience a medical emergency, the call boxes and surveillance could send a crew to respond within moments.

Severns says access to the new features could prove to be life-saving.

“If I’m down here and somebody’s having a heart attack, the cameras are watching, there’s a place close that you can call, you don’t have to depend on somebody else’s cell phone,” said Severns.

The cameras and call boxes are expected to be finished and ready to use at the end of June.