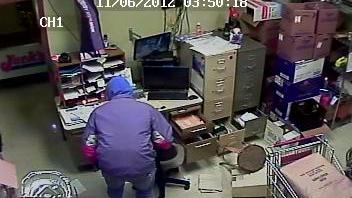 Deputies in two different counties are teaming up to ask the public for help identifying the suspects involved in two convenience store break-ins earlier this month.

The Cass County Sheriff’s Office is investigating a break in to the Mills Grocery on Sunset Boulevard in Union, Michigan on November 6th.

The Berrien County Sheriff’s Office is investigating a break in to Dale’s Minimart on N. 5th Street in Niles, Michigan on November 7th.

Video surveillance cameras in both stores show one of the suspects is wearing a very specific style jacket. A photo of the suspect has been released.

The burglaries at each store happened after the store closed.

If you have any information on either burglary, contact County Sheriff's Office Tip Line 1-800-462-9328, email tips via the Cass County Sheriff’s Office website or Crime Stoppers 1-800-342-STOP.