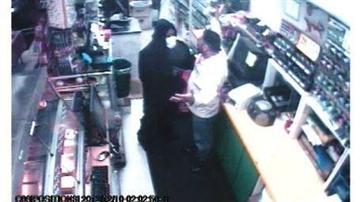 ELKHART COUNTY, Ind. – The Elkhart County Sheriff’s Department has released surveillance photos of the suspect in the robbery of a gas station on December 10.

Deputies say the suspect entered Smith’s Fast Food mart on Old US 33, displayed a gun and demanded money from the register.

The employee handed over an undisclosed amount of cash and the suspect left the store.

The suspect was described as a black male, wearing a dark hooded sweatshirt, black baggy pants, black gloves and a white mask on his face.

If you have any information on this crime, contact the Elkhart County Sheriff’s Department at 574-533-4151.