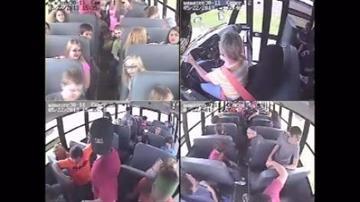 KOSCIUSKO COUNTY, Ind. -- Dozens of students were injured when four buses collided in Kosciusko County Wednesday afternoon on North SR 13. Surveillance video from one of the buses shows the moment of impact.

The video is from the first and front bus in the collision. Bus driver Cynthia Routh stopped to allow one of her students to get off.

Seconds later her bus was hit from behind.

The third and fourth buses sustained the most damage, but they did not have cameras on board at the time of the accident.

The Kosciusko County Sheriff's Department says skid marks are proof that John Wagoner, the rear bus driver, slammed on his brakes to try to stop.

State police ran tests on the bus and say there were no brake or electrical issues.

Even now, two days after the accident, many students are still shaken up. Some have even been having nightmares.

“Lots of kids come down and just processing what happened and how to handle some of the emotions with it,” said licensed mental health therapist Becca Snider of Wawasee Middle School.

School counselors say that in a traumatic experience like this, kids will try to internalize it, but the key is to keep them talking.

Wagoner is still in the hospital in Ft Wayne.

Around town his name came up in a positive light. A few kids said he was their favorite bus driver – and many parents said the same.

They said he had been driving their kids for generations.

The investigation into the exact cause of the accident is expected to take a couple more weeks.