Survival stories start to emerge amid destruction from wildfires 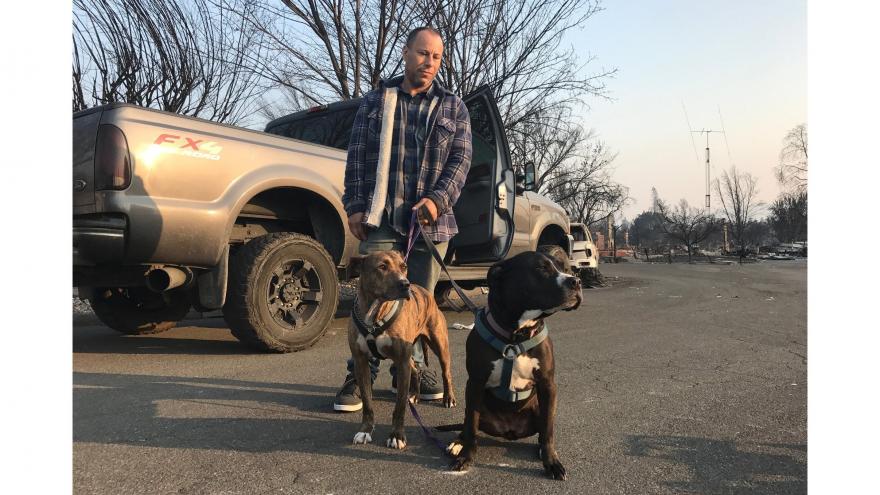 Amid the widespread destruction wrought by the California wildfires, fascinating tales of survival are starting to emerge.

Chapman said he received no warning that a raging inferno was headed toward his Santa Rosa home until one of his two dogs spoke up.

"My one dog, she's really alert to things. She started barking and just wanting me to check on stuff," Chapman said.

He went outside and saw ash blowing in the wind and "embers dropping everywhere."

"I just grabbed my keys, my truck and my dogs and took off," he said.

On Wednesday, Chapman's neighborhood looked like a scorched war zone. But he wasn't complaining.

"I'm just glad to be here. Glad to have my dogs," he said. "You can replace the stuff, but life is most important."

In Santa Rosa's Coffey Park neighborhood, Margaret Curzon's mother, Karen, woke up to the smell of smoke. But she thought it was the neighbor's chimney or a nearby barbecue, her daughter said. So she went back to sleep.

Curzon's parents only woke up for good after their bichon frise, Brady, started whimpering. Curzon's father Ed looked outside thought there may have been a bombing.

"It looked like we were at war," Curzon said. "The sky was orange, and there were embers falling from the sky."

Curzon said her parents had five to 10 minutes to grab their two dogs and anything else they could gather before jumping in their car.

She said it took about half an hour for her mom and dad get out of their neighborhood because cars were bumper to bumper.

"He could feel the car getting hotter and hotter because the fire kept creeping up and getting closer to them," she said.

When the family returned, the only item remaining was a concrete statue of the Virgin Mary.

"If it wasn't for my dog whimpering and waking my parents up, my God," Curzon said. "I don't know what would have happened."

'We had to evacuate within five minutes'

Zach Block and his brother tried to fight off flames in the backyard of Block's Santa Rosa home, but their hoses were no match for the flames.

Block awoke at 1 a.m. and smelled the fire. He woke his wife and also his brother, and they went to figure out how close the flames were to the house.

"As we were looking in the back, the backyard, we started to notice that the air started to become a little bit more dense in smoke, and then there's a lot of light from the fire shining on the other side of the freeway," Block said.

"And then within 10 minutes, you know, my brother and I were out in the backyard with the hoses and trying to fight off as much as we could."

As the fire continued its rapid approach toward the house, Block realized they had to evacuate. As it turns out, they only had five minutes to escape.

After leaving with nothing more than the clothes on their backs, Block and his family watched as the flames engulfed their home. It's one of around 2,000 structures that have been destroyed by the wildfires so far.

"You know, we're kinda figuring it out as we come across the things that we need to worry about," Block said. "The support has been unreal, and we're just kinda taking it one step at a time."