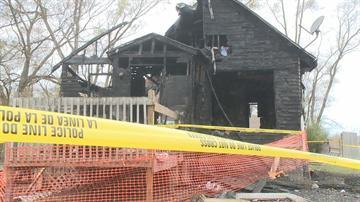 BENTON TOWNSHIP, Mich. -- With all of the rumors and speculation surrounding the deadly home explosion, Melinda Ross and Lisa Turner said they wanted people to know what really happened inside the house Saturday night.

On Monday afternoon, the two women sat in the living room of a relative’s house to set the record straight.

“I don’t understand how people can judge and put all that blame out there when they weren’t there,” Turner said.

The fire started in a bedroom on the main floor, an oxygen tank in that room caused the explosion, but investigators have yet to determine how the fire started.

“There is nothing to indicate anything suspicious about this fire; however, we’re not done yet,” said Michigan State Police Fire Investigator, Sgt. Scott LeRoy.

Relatives initially said there were more than a dozen oxygen tanks inside the home, but on Monday investigators only pulled one tank from the debris. “I’m not saying there could be more in there but I just located the one,” LeRoy said.

According to Turner there was a big oxygen concentrator that was on all the time and then one tank that was used as a backup. Both were in the first floor bedroom and Turner said there were not any more tanks in the house.

Turner said her mother, 48-year-old Cynthia Kent, suffered from chronic obstructive pulmonary disease (COPD), she was on oxygen and confined to a hospital bed.

Neighbors said Kent was a smoker, and she often had a cigarette while the oxygen was on. Last month, several people told ABC 57 News Kent burned her face while smoking with the oxygen mask place on top of her head.

Many have speculated a cigarette started the fire that caused the deadly explosion. LeRoy said, “That’s a possibility, that’s one of the things we’re still working on.”

Turner said her mother did smoke, and confirmed the story of the accident last month, but since then, Turner said she’s monitored her mom’s smoking.

“I know in my heart a cigarette did not start that fire.” Turner said before she went to bed, she went into her mother’s room and took Kent’s cigarettes and lighter.

Turner said the outlet Kent’s concentrator was plugged into could be to blame, “If you bumped it just right it would spark.”

Turner said she is not sure what started the fire; she went to bed, hours later she woke up coughing to a smoke filled house. Turner woke up her girlfriend, Melinda Ross and went down the hall to her mother’s room.

“She was gone, I mean I woke up and she was on fire, there wasn’t anything I could do.”

The hospital bed was on fire, through the flames Turner could see her mom’s body, “She was curled up in a ball, and her head was down like by her chest.”

In the doorway Turner said she stood frozen, but she knew she had to get her 7-year-old son out of the house.

Turner grabbed her son and ran outside, Ross stayed back to try and help the three other people inside.

Ross said she went to find her find her brother, Josh Hoffman, “The flames were just instant you know,” Ross said. Josh shared a room with Kent, he was in his bed when the fire started.

Ross said she could not see through the flames, when she turned around to shield her face she could see her mother, Norma Hoffman coming down the stairs.

“I knew I had to get her out of there,” Ross said she took Norma out of the house, “All I could hear her say it get my baby, get my baby.”

28-year-old Josh, had cerebral palsy he could only walk on his knees with the help of a walker and he was still trapped inside.

Ross tried to go back in for her brother, but couldn’t get back inside, “The smoke was just you know, it was too much… I couldn’t breathe.”

59-year-old Norma tried to back in to save her son, but when she got up to the porch the house exploded, the blast threw her back away from the house.

“As burnt as she was she sat up and all I could see was her face, and she reached out to me.”

After the first explosion, several others followed, “The windows just exploded and the house was just engulfed,” Ross said.

Kent and Josh died inside the home. Josh tried to escape on his own; he dragged himself out of the bedroom, toward the front door. The house exploded before he could make it out.

“I still blame myself. I’m beating myself up,” Ross said. “I haven’t slept.  I’ve barely eaten.”

Norma burned suffered third-degrees burns to 25-percent of her body, on Monday relatives said she was still on life support but upgraded to stable condition.

Doctors have Norma in a coma, family members said she still does not know about her son or her friend’s death.