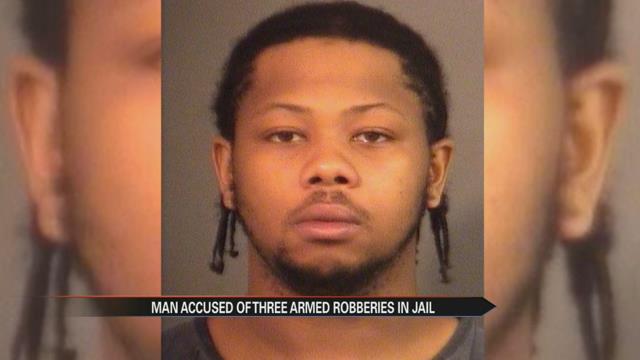 A suspect in a string of Michiana armed robberies is behind bars.

Desmon Abrams, 23, was arrested Sunday at the Comfort Inn in Mishawaka for allegedly assaulting a woman.

When police questioned the woman, she claimed she witnessed Abrams commit and brag about various robberies. ‘

The robberies Abrams is accused of started in early January, with Family Video in Mishawaka being robbed at gunpoint two times, and then robbed once more.

Surveillance video from the three businesses showed a male suspect in a black mask and hoodie.

The suspect repeatedly told victims he was committing the crimes for his dying child.

In Abram’s probable cause affidavit, his female confidant says he told her he was committing robberies because of him, but also threatened her.

Abrams is charged with four counts of armed robbery and one count of robbery.

Employees at the businesses say they couldn’t be more relieved.

“I can actually come back to enjoying my job,” Racine Conley, an employee of Family Video, said Wednesday.

The prosecutor says Abrams has children in Michigan, but it was not confirmed whether any of them are actually sick.