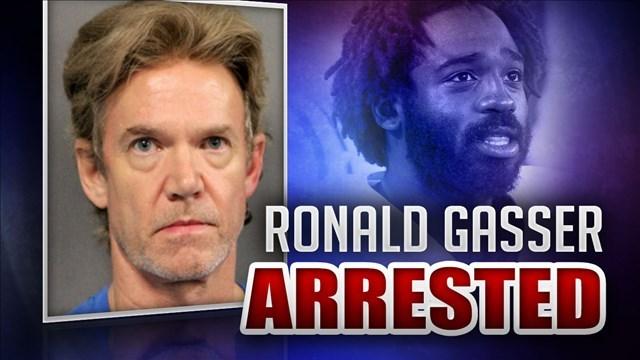 (CNN) -- Days after the suspect in the fatal shooting of ex-NFL player Joe McKnight was released, sparking allegations of racial bias by police, the Jefferson Parish sheriff announced Tuesday that Ronald Gasser was back in custody, charged with manslaughter.

Sheriff Newell Normand said his investigators had identified 260 possible witnesses, interviewing more than 160 of them, since Thursday's apparent road rage incident that left the former pro running back and Louisiana high school standout dead in the streets of a New Orleans suburb.

They also spoke to 70 business owners in an attempt to procure video, none of which showed the shooting, he said.

Key witnesses were located on Saturday and Monday evening, Normand said, and they might not have come forward had authorities rushed forward with an arrest to appease critics of the Jefferson Parish Sheriff's Office.

As for the charge, Normand said the evidence in the case pointed to manslaughter, which Louisiana law states is a homicide "committed in sudden passion or heat of blood immediately caused by provocation sufficient to deprive an average person of his self-control and cool reflection."

He thanked McKnight's family members and credited their attitudes with the "calm in the community" following Gasser's release from custody Friday.

"Thank you for your patience, your restraint and your trust in the process," he said.

Normand said releasing Gasser last week helped investigators put together the case they have now. Gasser agreed to be interviewed for 12 hours without an attorney and consented to a search of his home for which investigators never could have obtained probable cause. Police also were able to conduct multiple crime scene re-enactments and consult with the district attorney's office, he said.

The extra time allowed investigators to dispel bogus witness statements, including accounts that Gasser shot through McKnight's windshield, pulled McKnight out of his Audi, shot McKnight while he was on the ground, used the N-word and boasted that he had voted for President-elect Donald Trump.

Another impediment to a quick arrest, he said, was Louisiana's self-defense laws, which demand that police "get it right," he said.

"We have a very forward-leaning stand your ground, self-defense, justifiable homicide law, however you want to refer to it," the sheriff said.

To those who would criticize his investigators or say they don't know what they're doing, Normand replied, "Tough. I don't care. Because what I know is I can put my head on the pillow every night knowing we did the right things for the right reasons."

The sheriff devoted more time in his Tuesday news conference to defending his investigation and deriding its critics than he did to details of the case. At one point, he read off a list of profane pejoratives directed at him, his officers and their defenders, including "Uncle Tom," "puppet" and "white boy."

At one point, he repeated the N-word and a slur used against gay people as among the other epithets. He also cited black-on-black killings as a bigger problem in the parish than race-based killings.

Denial that case not about race

Normand reiterated his assertion from last week that the case has nothing to do with race despite Gasser, 54, being white and McKnight, 28, black. It was more about "two people engaged in bad behavior," he said.

According to witness statements and evidence, he said, the altercation began on the Crescent City Connection that crosses the Mississippi River, between New Orleans and Terrytown, where the shooting occurred.

McKnight, driving his stepfather's Audi Q7, cut off Gasser, who gave chase, Normand said. The two verbally engaged each other, rode each other's tails, zipped around other vehicles and cut each other off, the sheriff said.

At a Terrytown intersection, Gasser got in front of McKnight, who pulled along the passenger side of Gasser's Infiniti G37 sedan. Gasser was "hemmed in" by other cars and had no "avenue for retreat," Normand said. With their windows down, the verbal altercation continued until McKnight exited his vehicle.

Gasser pulled a gun from between his seat and console and fired three shots through his passenger window at McKnight, the sheriff said. He then exited his car and took a "police sweeping position" before a naval officer convinced him to put his gun away, he said.

McKnight was shot in the right shoulder, the right chest and the hand, Jefferson Parish Coroner Gerald Cvitanovich said.

McKnight's stepfather's gun was in the Audi, Normand said Tuesday, but there is no evidence suggesting McKnight told Gasser he had a gun or threatened to retrieve it.

The case is "still maturing," the sheriff said, and it's possible evidence could surface that would prompt investigators to elevate or downgrade the charges against Gasser.

In 2006, Gasser was involved in a road rage incident and was charged with a misdemeanor, but it was dismissed, the sheriff's office said.

The charge came after a man reported Gasser followed him into a gas station parking lot, got out and punched him several times. Court records show Gasser failed to show for his arraignment in September 2006 and later paid a fine for contempt. On November 27, the case was dismissed, court records show.

Though McKnight, a Kenner resident, spent his professional years with the New York Jets and Kansas City Chiefs, he grew up playing football in River Ridge, a 30-minute drive from Terrytown.

He was named Louisiana's "Mr. Football" in 2006, and The Times-Picayune newspaper named him the male high school athlete of the decade in 2009.

McKnight went on to play at the University of Southern California before being drafted in 2010 by New York, where he played until 2012. He sat out 2013, played 2014 with the Chiefs and 2015 with the Saskatchewan Roughriders and the Edmonton Eskimos of the Canadian Football League.

"Joe will be remembered for a lot of good things and I was proud to have known him and proud to have coached him," Ryan wrote on the Bills' website.

In April, Will Smith, who played defensive end for the New Orleans Saints, was shot to death and his wife was wounded in downtown New Orleans, apparently after a traffic dispute with another man, authorities said. Cardell Hayes was charged with second-degree murder in Smith's death.