Suspect in Pennsylvania killings had frequent contact with police 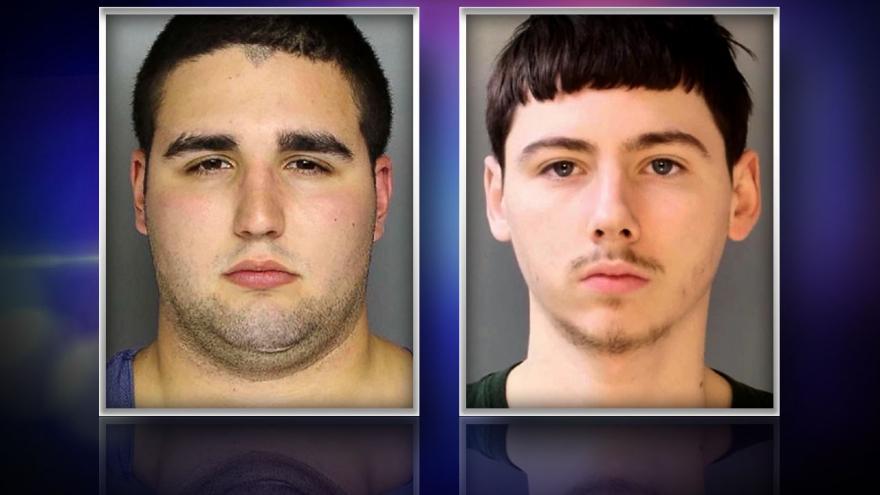 (CNN) -- Before four men in Pennsylvania vanished last week, they were enticed to meet with Cosmo Dinardo in hopes of buying marijuana, Bucks County officials said.

But Dinardo or his cousin -- Sean Kratz -- allegedly shot them.

Little is known about the relationship between the suspects and the victims, but details about the men who are charged in connection with the killings are becoming public.

Here's what we know about Dinardo and Kratz, who are charged with multiple homicides. A judge has entered not-guilty pleas on their behalf.

Kratz didn't have an attorney at his court appearance Friday.

Investigators said Dinardo, 20, lied to them during an initial police interview and days later, confessed to the killings of the missing men, according to a police criminal complaint.

When first questioned, Dinardo claimed -- the complaint states -- that he was at home after a fishing outing on July 7, the day three of the men disappeared.

In a second police interview, Dinardo told detectives he killed three of the men but claimed that it was Kratz who shot and killed Finocchiaro. Dinardo said in that interview that he shot Finocchiaro only after Kratz had shot the victim in the head..

Paul Lang, an attorney for Dinardo, said Thursday that his client has confessed to being involved in the killings.

"He was very forthright and gave all relevant details that he could," Lang said.

Dinardo, while being walked to a police transport unit on Thursday, told reporters: "I'm sorry."

Since 2011, local police have had more than 30 contacts with Dinardo, Fred Harran, director of public safety with the Bensalem Police Department told CNN.

Harran wasn't specific about the nature of those police visits, but he explained that a "contact" does not necessarily lead to an arrest or charge. Such interactions usually come from either a citizen call to police or officers coming across an individual.

Dinardo was charged in February with a gun possession charge. He is prohibited to carry a gun because he is "known to be suffering from mental illness" and had been involuntary committed to a mental institution, the affidavit related to that offense says.

The charge was initially dismissed because there was an issue with the mental health paperwork and with testimony regarding Dinardo's mental health in an involuntary commitment to a mental institution on July 12, 2016, Harran said.

The charge was reinstated on July 10 and, and that reinstatement led to Dinardo's arrest the same day.

Dinardo also had issues at a Pennsylvania school.

Dinardo was a student for one semester at Arcadia University in Glenside during the fall of 2015, a source at the university told CNN.

It was unclear what Dinardo was doing after he left the school.

He returned the fall of 2016 presumably to re-enroll at the school but he had verbal interactions with several members of the university community, the source said.

None of the interactions were violent, threatening, or confrontational but nonetheless it unnerved several individuals, the source said.

The school's public safety office and local police were contacted. The university sent a verified letter to Dinardo's family saying that if he were to return to campus it would be considered trespassing because he was no longer a student.

The family acknowledged receiving the letter, the source said.

Kratz told detectives he and Dinardo discussed robbing three of the missing men prior to the killings, the criminal complaint says.

In a police interview, he described how Dinardo shot Finocchiaro, Meo and Strugis and how his cousin disposed of the bodies, the document states.

Kratz says he shot no one, the complaint states, but was charged in connection with the deaths of three of them.

He also led investigators to a home in Montgomery County where they found two firearms, the document says.

Kratz has a long rap sheet and had been out on bail when the killings happened, according to CNN's review of court documents.

In February, the 20-year-old was charged in Philadelphia County with burglary, conspiracy, criminal trespassing, theft, receiving stolen property, and criminal mischief. He posted bail on March 5 and was due in court for a preliminary hearing on August 4.

Kratz was charged in December with retail theft, receiving stolen property, and possessing an instrument of crime in Montgomery County, court records show. The case was closed in February.

Kratz's records show another case with multiple charges. In June 2016 he was arrested in Philadelphia County and accused of burglary, conspiracy, criminal trespassing, theft, receiving stolen property and criminal mischief. A May hearing in the case was postponed to July due to "defendant medical issues," according to court documents.

CNN attempted to reach an attorney listed at Kratz's lawyer on previous court documents, but was unsuccessful.