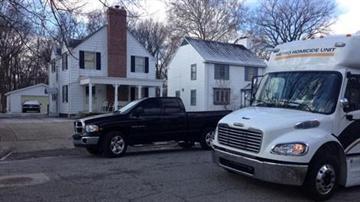 SOUTH BEND, Ind. -- A suspect who allegedly fled from a South Bend Police officer attempting to conduct a traffic stop was injured and remains hospitalized under police custody.

The officer attempted to stop 55-year-old Thomas Stevens at Sunnymede and Twyckenham in South Bend.

"By the time we came downstairs and looked out the window, there were already about 10 or more police cars on the scene," said resident Amy Hill.

"I looked out the window and I couldn't even see past the street there was so many lights and sirens and ambulances and stuff," said resident Abby Waterhouse.

The driver didn't stop, but continued on to his home in the 1500 block of Sunnymede, where he lives with his mother.

The officer tried to arrest Stevens at the home, but he was injured while resisting arrest.

He was taken into custody for resisting arrest and battery to an officer, and was taken to Memorial Hospital for treatment.

He is still in the hospital under police custody.

"You know the car looked familiar to us. It's one that we've seen around so it didn't stand out to us as being suspicious but we did not know the individual," said Hill.

Stevens' mother, 76-year-old Suzanne Stevens, was also arrested and was taken to jail for resisting arrest and battery to an officer, according to police.

"There's been a lot of burglaries and break-ins in our neighborhood the past couple of months. I guess you could say since summertime and so that's kind of what we've been following and there's a guy who lives in a house on our street who we've kind of been following," said Waterhouse.

County Metro Homicide was called to handle the investigation because of the injury to the suspect.

No criminal charges have been filed yet, the Prosecutor's Office will make a charging decision within 48 hours of their arrest.