Suspect pleads guilty after police get DNA from toilet 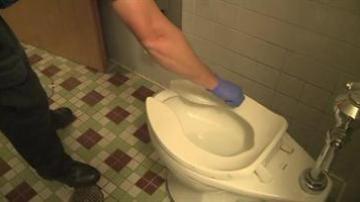 NILES, Mich. -- The man whose bathroom habits led to his arrest pleaded guilty to felony larceny on Monday. Stefan Blakemore stole thousands of dollars worth of equipment from the Holistic Wellness Academy in Niles in February 2012.

"He took a computer monitor but didn't take the computer. He took some zen giro-bands which help with balance, he took an orthotic scanner that measures your foot. Just a hodgepodge of things that he took. He poured beverages on things that he may have touched to try and cover up his fingerprints," said Chad Gardner, owner of the Holistic Wellness Academy.

Blakemore was caught because he left something behind - on the toilet seat.

Before he left, he used the bathroom and didn't flush away the evidence that placed his DNA at the scene.

"It's as easy as just rubbing on the seat where we think somebody had contact, and then we'd get some contact DNA," said Kevin Kosten of the Niles Police Department.

That DNA led police to Blakemore.

"In this particular case, swabbing a toilet seat, it's one of the first that I've seen in 17 years but wherever somebody has contact with, we'll swab it in hopes that we get some DNA," said Kosten.

Gardner said that as a small business owner, he's thankful that police were able to take another crook off the streets.

"He was convicted of 270 days and that's good because we don't need people like that on the street because America works too hard to make ends meet and he's coming in and taking from us," said Gardner.

Gardner says he never recovered any of the stolen goods but is happy because the man who did it is behind bars.