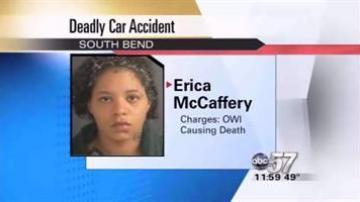 SOUTH BEND, Ind. --  A woman is facing multiple charges after driving her car into a South Bend home and killing the woman inside.

It happened around 1:30 a.m. on Friday at the intersection of Corby and Twyckenham in South Bend.

56-year-old Barbara Knapp and one of her dogs were found dead at the scene.

The Fatal Alcohol Crash Team was called to the scene to investigate. They determined that McCaffery was traveling westbound on Corby when she tried to turn south at Twykenham, but lost control and drove into a house on the southwest corner.

Police arrested 23-year-old Erica McCaffery and said they believed that alcohol was involved in the crash.

The home is scheduled to be torn down Tuesday.