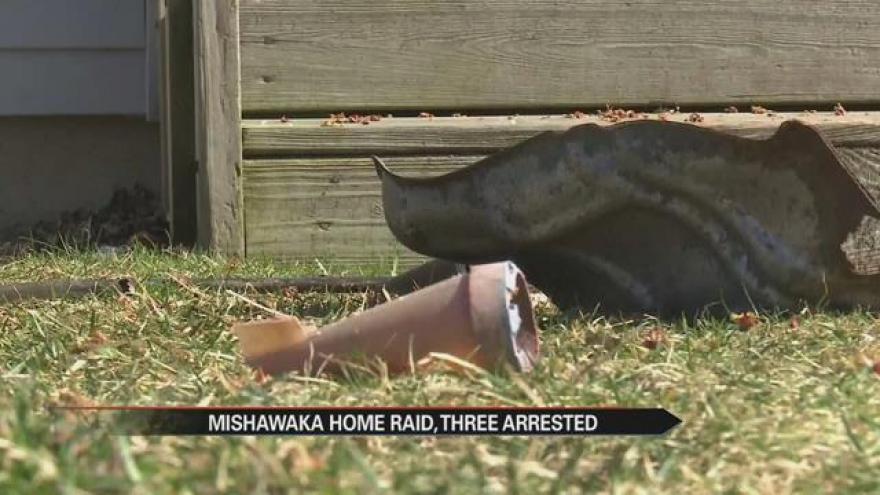 A SWAT situation and investigation in Mishawaka late Saturday night, lasted several hours. ABC57 news was the only station on the scene, learning that drugs and weapons were involved.

But Saturday night, the quiet shattered with a bang.

"We were getting ready to go to bed, we heard some ruckus out here, so we looked out and we saw there were police," recalls Paul Highland, a neighbor.

Neighbors, like Highland, heard officers ordering the people in one home to get out.

"They shot multiple rounds of tear gas into the house," says Highland. "Probably 25 law enforcement agents running around, getting people out of the house. And then they went in and started confiscating."

Shattered glass, tire marks, and gas cartridges lay all over the lawn.

But it doesn't surprise anyone that something like this happened at that home.

"These people have had traffic coming in and out all hours of the night," adds Highland. "The police have been here multiple times. Everyone assumed something was going on like drugs and stuff."

Two people were taken in for questioning from the home itself, but they weren't the only ones.

Neighbors say others were caught at the end of the street.

"They pulled down here, and the cops were already here blocking this side off, and they stopped them, detained them, got them out of their cars, and searched them and all that," remembers Highland.

Sunday, St. Joseph County Police said at least three people were detained Saturday night.  They confirmed that Rodney Ross, who was arrested by the ATF was one of them.

Neighbors have had enough.

"We were actually contemplating getting out of here and moving," said Highland. "If this wasn't going to be dealt with, we were going to leave."

Many declined to talk to ABC57 on camera, saying they were scared of retribution. But several did say they were happy their neighborhood will be safe again.

One neighbor put it, "this is a good neighborhood where something bad happened."

All thanked law enforcement for putting an end to this dangerous situation.

Highland hopes it stays this way.

"I'm hoping we can get back to normal. A nice, quiet neighborhood," he says.