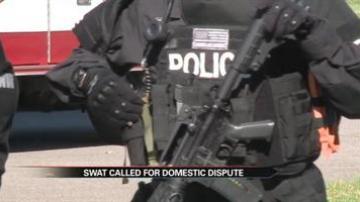 SOUTH BEND, Ind. -- A standoff ended with one man injured Sunday, with what police are calling a self-inflicted wound.

Around 40 officers, including the South Bend SWAT and hostage negotiators surrounded a home on the 6600 block of Leeway Drive for over an hour.

The woman who lives in the house managed to escape and call police.  When officers arrived, around 2:15 p.m. there was a 76 year old man in the house, armed with a gun and refusing to come out.

He eventually surrendered, and was taken to the hospital to have his self-inflicted wounds treated. Police say his wounds are not life-threatening.