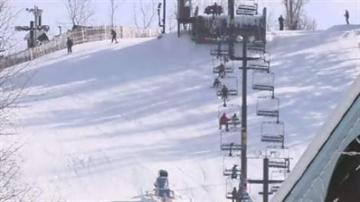 JONES, Mich. -- Swiss Valley is hosting the Winter Jam Friday night. After the weather struggles they’ve had this season, they’re looking forward to a night of packed slopes and a fun competition.

Swiss Valley is dreaming of a white February.

After months of mild conditions, workers feared they'd never open, but their patience paid off.

"We had a little bit of a late start, we didn't open up until December 30th. And then within the last seven days we've experienced all four seasons that Michigan has to offer,” said Jamie Stafne, Marketing Director, Swiss Valley.

But in the last two days Mother Nature coated the slopes with 10 inches of fresh snow.

"We're feeling good. As you can see the hills are white, plenty of natural snow, we've got a great base and we were able to make snow last week when the temps were lower,” said Stafne.

The staff is beyond relieved.

The slopes are open and athletes are gearing up for the annual Winter Jam event.

"Stuff like this is cool because parents start to understand why their children are so excited about skiing or snowboarding,” said Josh Nichols, snowboarding instructor.

Contestants are scored one through ten by 3 judges based on trick difficulty, amplitude and landing.

“Just like being able to do new stuff. I always try to be able to do something new every time and push myself,” said snowboarder Haley Stanton.

“This is my first time actually witnessing Winter Jam but I've heard from people it's tons of fun that they do some pretty sweet stuff,” said snowboarder Allie Yoder.

Now those season-pass holders say they can't wait to get their money's worth.

"I was thinking it was a waste of money at first but then I was thinking like the season just started and usually goes until March,” said Stanton.

If you're unable to stand up on a snowboard – let alone do tricks - there's also the kiddie slopes, pizza, a big toasty fire and music all night long.