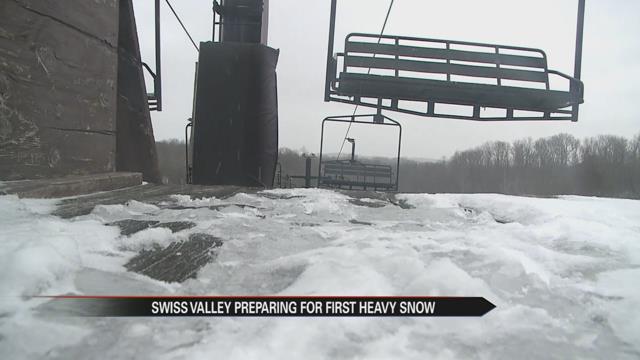 A ski resort in Michiana says the last two Christmases haven’t been too merry for them and the snow, or lack of it, has a lot to do with that.

That’s why they’re welcoming the system that’s heading this way.

The owner of Swiss Valley Ski Area, James Wiseman, says there was way too much green on the ground, the last couple of holiday seasons.

But Thursday’s snow has renewed their hope for an earlier start to business.

Thursday, the hills were empty, the ski lifts at a halt, but snow was in the air and employees at Swiss Valley were optimistic that their slopes will open earlier than it has in previous years.

Wiseman, Swiss Valley’s owner for over 30 years, says the phones have been ringing all day long in anticipation to a head start to the ski season.

Last year, you couldn’t find a single skier at Swiss Valley in the month of December, but employees say Swiss Valley could be open by as early as next weekend.

And while this early snow is a major reason for that, Wiseman says there’s still plenty of snow, that needs to be made.

“We’ll probably make snow for one or two or three days, day and night, and we’ll probably put on a lot of water and have probably, probably develop a base by tomorrow or the next day,” said Wiseman.