Talladega College band on inauguration: 'Forget the politics... We are musicians' 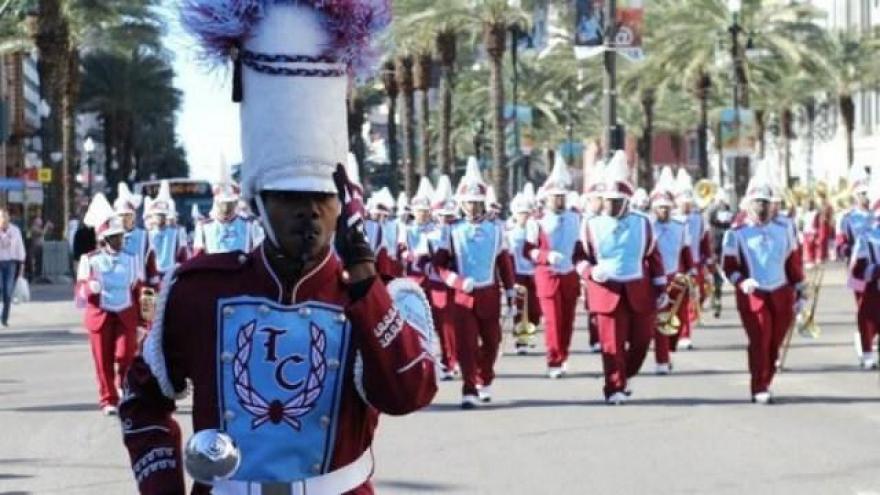 Liddell, the tuba section leader of The Great Tornado marching band of Talladega College, studied a notebook of names and matching uniform numbers. He was pleased at the progress.

But there was still much to do on Tuesday, the day before the band from the historically black college in Alabama would depart to perform in President-elect Donald Trump's inaugural parade in Washington: Sort room assignments. Practice parade songs. Fine-tune the arrangements and choreography.

The school's decision to have its band participate in Friday's parade has drawn criticism from some alumni and others.

But the fact that it's going to perform on a national stage is something few would have imagined when it was created in 2012 as an attempt to bolster enrollment and get the college name out there.

It's almost as if the band has been preparing for this from the start. Its members are indeed a band of survivors, many blossoming from beginners to solid musicians. The band was also a new start for some, offering them a chance to return to college after they initially didn't even envision graduating.

Talladega is now a household name -- and the darling of conservatives, who helped raise more than $626,000 (that's more than eight times the $75,000 goal listed on the band's page at gofundme.com) to send nearly 230 band members, 50 students and about 20 others to the nation's capital.

Critics: Marching is show of support for Trump

Talladega was among the 40 organizations that accepted an invitation to participate in the parade, which will follow the swearing-in of the new president. One of songs the band will perform is patriotic: James Brown's "Living in America." Another is the popular "Happy," by Pharrell Williams. One tune, "Sweet Talk," will be performed in memory of a band member and graduate who died of a heart attack on Christmas Eve; he had arranged the band's music to the song.

"I don't think we would've ever thought we were going to be on a platform this big," said 21-year-old Dylan Brown, a snare drummer from Opelousas, Louisiana. "But with the grace of God, that's how stuff happens."

Critics say marching in the parade amounts to a show of support for President-elect Trump, who made comments during the campaign widely seen as disparaging to immigrants and people of color.

He pledged to build a wall to keep immigrants out and called Mexicans "rapists" and "killers." He also questioned the legitimacy of Barack Obama's presidency by repeatedly suggesting Obama wasn't born in America. Recently, Trump said Georgia Rep. John Lewis was "all talk" and "no action" after Lewis declared that Trump was not a "legitimate" president. Lewis, a contemporary of the Rev. Dr. Martin Luther King Jr., was beaten by police in Selma, Alabama, in 1965 while marching for civil rights.

The criticism has come from alumni and others associated with the college, as well as from outsiders. One graduate started a petition asking the band to withdraw. A band student started a rival petition encouraging the Tornadoes to go to Washington.

In a letter posted on Facebook, three brothers -- Peter, David and Steven Rasmussen -- wrote Talladega College President Billy C. Hawkins to say they would be returning the honorary degrees given to their parents, Donald and Lore Rasmussen, who taught at the college from 1942 to 1955. Lore Rasmussen was a Jewish refugee who escaped from Nazi Germany.

Their late parents "would be angered and deeply disappointed" if they knew of Talladega's plans to participate in Trump's inauguration festivities, the letter said. Trump is the "antithesis" of everything their parents worked and stood for and of the values they instilled, the sons wrote.

Hawkins said people are "trying to drag politics in our decision."

"I've said from the outset: This is about giving our students an opportunity... to be a part of this historic ceremony on the changing of power," he said. "It's a learning experience. It is a civics ceremony."

Raise it, and they will go

Talladega, which was founded in 1867 by former slaves, has 800 students. It's Alabama's oldest private historically black liberal arts college, according to the school's website.

Hawkins said the trip is now estimated to cost about $100,000. The rest of the donated funds will go to improve the band program.

Money continued to pour in Tuesday.

A representative of Bill O'Reilly offered to give Talladega $25,000 on behalf of his foundation, Hawkins said. A stranger from Pittsburgh wrote a $5,000 check, along with a note: "Your band supports the essence of American democracy rather than any one political candidate."

Hawkins said the trip also brings publicity to Talladega, which was on verge of closing due to financial issues and struggles with accreditation when he arrived in 2008. Four years later, he started the band, which has a budget of about $1 million, including about $500,000 in scholarships.

When asked his thoughts about Trump, Hawkins said: "I don't know the man, personally. So, I really don't even have any personal opinions one way or the other.

In town, feelings were mixed about the trip.

"I think it's great. These kids that are going may never get that opportunity," said Tina Williams, the owner of Tina's Home Cooking, a restaurant not far from the school.

Clay Fluker of Talladega said the trip "can be a good thing and it can be a bad thing."

"By them going to inauguration, it'll make the college stand out. But their safety could be in jeopardy," he said. "I pray nothing happens to them."

At least one band member said his parents also worried about his safety.

Mellophone player Joseph Madison, 30, supported Bernie Sanders' candidacy for president and had some reservations about participating in the parade.

"Initially, I was a little thrown off. I was like 'We're playing for Trump,'" said Madison, who's from Memphis, Tennessee.

Eventually, he decided to go. "This is what we do, and this is the biggest stage," he said. "Forget the politics... We are performers. We are musicians."

Another chance to graduate

Madison toiled at Texas Southern University for three semesters, but after some financial struggles and a lackluster academic performance, he left and took a job as a hospital security guard on the graveyard shift.

Two current band members encouraged him to audition for Talladega in 2013, but family members tried to talk him out of it because he was already 27 at the time.

"I honestly feel like I was destined to come here," he said.

Battle, 27 of Birmingham, Alabama, worked a construction job after leaving Alabama State University in Montgomery, which he attended on a band scholarship. Then, an assistant band director at Talladega encouraged him to audition for the school's new band. He did, and even got a scholarship.

"I felt like I was in a beginner's band in middle school," said Battle, who plays the trumpet, about his early days with the band. "Now, we have good musicians."

He's going to graduate soon, and his photo will join those of more than three dozen other graduates in band director Miguel Bonds' office.

On Tuesday, Battle sat in a corner playing "Round Midnight" by Thelonious Monk, waiting for practice to begin.

"Horns up," came the call to order.

Tuba players rocked from side to side as the band hustled though songs like "Caribbean Queen" by Billy Ocean and "Happy."

Members of the drum section clapped cymbals together, marching in place, their heads bopping.

Then they got low, legs spread, hips swaying.

Other band members rocked to the beat in their seats. Sweat trickled down faces. Drenched t-shirts clung to skin.

On Wednesday, the city gave The Great Tornado Marching Band a sendoff and a police escort as it left the city.

"It'll take an act of God to stop us right now," Madison said. "We're going to be the shock of the day."