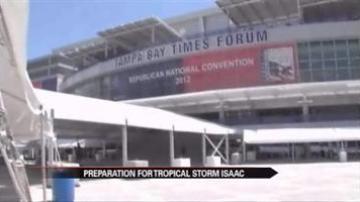 TAMPA, Fla. -- As Tropical Storm Isaac had an eye on Haiti and the Dominican Republic, Tampa's mayor is keeping a watchful eye on the storm as it moves closer to Florida's west coast.

The storm is already 600 miles wide and the winds have taken its toll on Puerto Rico.

Forecasts project the storm is shifting west into the Gulf of Mexico.

Isaac is expected to remain a tropical storm until it reaches the warm waters of the gulf.

The Republican National Convention is next week in Tampa.

The city has not made any plans to cancel the convention. Yet.

"We think the only impact will be rain and wind," Mayor Bob Buckhorn said. "We are more focused on full steam ahead with the Republican National Convention, all of the preparations, getting ready for all of the visitors, guests, members of the media that will be here. it's going to be a great experience for everybody."

The last time in hurricane made landfall in south Florida was in 2005.