Tanker full of liquid nitrogen crashes on I-94 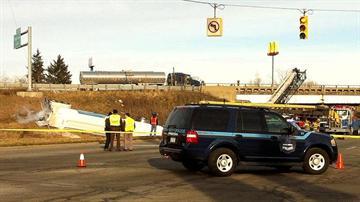 BENTON HARBOR, Mich. --  A semi tanker full of liquid nitrogen rolled over on I-94 in Benton Harbor Thursday morning.

Investigators say the driver, 59-year old Donald Smith of South Bend, had just left LaPorte where he had filled his tanker with 7,000 gallons of liquid nitrogen.

"He was on his way to Dexter and Ann Arbor, Michigan,” said Lieutenant John Cayo of Benton Township Fire.

That's when Lt. Cayo says he came burrowing down an embankment leaving I-94 flipping his tanker.

"He was coming from that direction he came off of this exit ramp - but see where it turns and comes towards us-- he didn't and he just kept coming straight,” said Cayo.

The Benton Township Fire Department was called out to help with the rolled-over semi around 3:30 a.m. Thursday.

"We got here we saw that it was a liquid nitrogen tanker,” said Cayo. "It didn't rupture those tankers are built really well - from what I'm told they are like a giant thermos. It did vent however."

The liquid nitrogen caused a white cloudy plume over the interstate, making it tough to see through.

"We shut down the highway between the 28 and the 33 mile marker going both east and west bound,” said Cayo.

Pipestone Road was closed in both directions as well so a towing company could work on getting the semi upright.

"We were going to Meijer but we couldn't get through because they have the road closed,” said driver Gary Welch.

“And we are just sitting her to watch um pick it up,” said Shirley Welch, Gary's wife.

But like most onlookers, they decided to leave. The accident took close to ten hours to clear.

As crews waited as more than 3,000 gallons of liquid nitrogen vented out from the tanker, making the semi light enough for the towing company to manage.

The driver was not hurt in the accident. At this point he has not been issued a traffic citation.