Taxi driver robbed over the weekend in South Bend 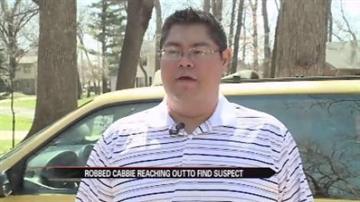 SOUTH BEND, Ind. -- An ordinary work night ended up taking a terrifying turn for a South Bend taxi driver Sunday morning when he was robbed by a man posing as a customer.

Ben Naval loves his job as a taxi driver. He says a lot of high profile people have sat in his taxi thanks to Notre Dame football, including Regis, Coach Kelly, Bon Jovi and Manti Te’o.

Sunday night around 12:30 a.m., he picked up a customer near Club Fever who was wearing a long-sleeved Notre Dame. He asked to be dropped off near campus.

"He says, ‘Listen very carefully and you won't get hurt,’ he said. ‘I have a gun in your back and I want your money,’" said Naval. "I just handed him basically my roll of ones and fives."

Naval radioed into dispatch and told them he was being robbed by using code words.

“All I kept thinking is that I've got my two kids and I'm about to get shot over $60,” said Naval.

But dispatch radioed back to let Naval and the robber know that help was on the way.

"He heard that the police had been dispatched ‘We've got you on GPS,’ dispatch said. I was thinking to the dispatcher like why are you telling me all this?” said Naval.

Naval said the suspect got very impatient and demanded he pull over immediately.

"I pulled over right here and then here's the alley way that he darted through right here,” said Naval.

Police arrived within a few minutes.

"I told the police officers that I never actually saw a gun. The guy could have been just messing around with me but I wasn't going to question him,” said Naval.

Naval hopes police find the man who robbed him because it has really affected him.

“I am still not sleeping correctly. I'm still having trouble getting focused and actually getting into my cab," said Naval.

Naval says the suspect was a white man in his early to mid 30s, wearing a yellow St. Louis Cardinals hat, medium complexion and a mustache.

South Bend Police are working this case. If you have any information you are asked to give them a call.