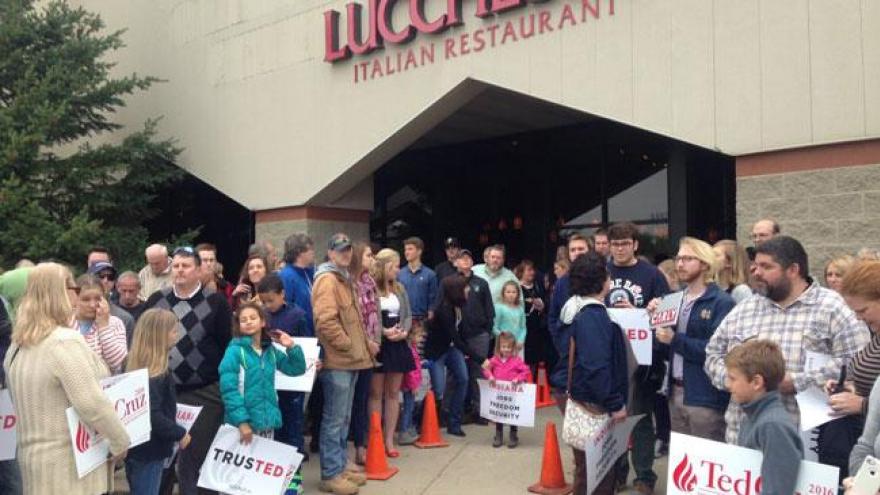 They arrived around 4:45 p.m., about half an hour after their event at Lucchese's in Elkhart.

During the speech, Cruz spoke about choosing Fiorina as his running mate. He made the decision on Wednesday.

One of the reasons he said he chose her, is because she scares Hillary.

He added he made the decision to name his running mate so early is to unite Republicans and Americans.

Cruz spoke about the issues he plans to address if he becomes president. He said he would repeal Obamacare and pass a flat tax.

He also said he plans to get rid of the IRS.

Fiorina and Cruz arrived to Lucchese's Italian restaurant on CR 17 in Elkhart at approximately 3 p.m. and stayed until 4:15 p.m.

Donna Enfield had Cruz sign a copy of the US Constitution.

"I feel wonderful and I have all my support behind him," said Enfield.

There were a few undecided voters who wanted to hear Cruz plead his case to Hoosiers.

"I'm not going to say it's going to sway me one way or the other," said Joe Patton, who is still undecided.

There were even a few Bernie Sanders supporters protesting outside the restaurant.

They also took pictures with the Lucchese family, the owners of the restaurant.

At the end of the event, they climbed on the bus and headed to their next event, at the South Bend Century Center.

"It's always great to have energy and it's great to have more attention on the challenges and issues in a community like ours. And the fact that this year anyone who wants to be president needs to come to Indiana I think has a lot of positive things with it," Buttigieg said.