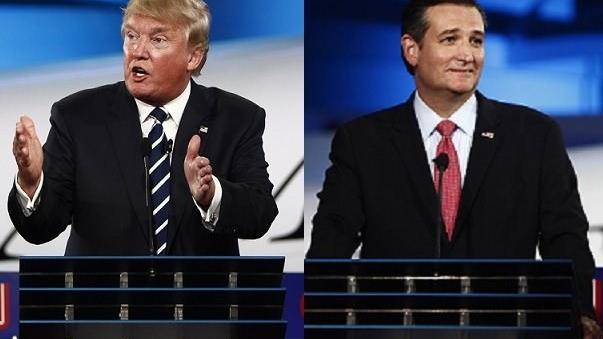 After weeks of personal attacks from Donald Trump, including fresh insinuations that his father was associated with Lee Harvey Oswald, Cruz boiled over Tuesday.

"I'm going to tell you what I really think of Donald Trump," he told reporters at a news conference.

He then lit into Trump in terms that were sharply personal -- even for the already rollicking 2016 Republican primary.

Cruz blasted Trump as a "pathological liar," "utterly amoral," "a narcissist at a level I don't think this country's ever seen" and "a serial philanderer."

Cruz's heated comments underscore just how important the Indiana contest is to his campaign and reflect his effort to put everything he's got into the race before the polls close in most of the state at 6 p.m. They also reflect the increasingly personal nature of the battle between Cruz and Trump.

He unleashed his full arsenal of insults in his attack on Trump.

"He is proud of being a serial philanderer ... he describes his own battles with venereal diseases as his own personal Vietnam," Cruz said, citing a decades-old Trump appearance on "The Howard Stern Show."

"This man is a pathological liar, he doesn't know the difference between truth and lies ... in a pattern that is straight out of a psychology text book, he accuses everyone of lying," Cruz said as Indiana voters headed to cast their ballots. "Whatever lie he's telling, at that minute he believes it ... the man is utterly immoral," Cruz said.

Trump hit back in a statement blasting Cruz as a "desperate candidate trying to save his failing campaign."

"It is no surprise he has resorted to his usual tactics of over-the-top rhetoric that nobody believes," Trump said. "Over the last week, I have watched Lyin' Ted become more and more unhinged as he is unable to react under the pressure and stress of losing, in all cases by landslides, the last six primary elections --- in fact, coming in last place in all but one of them.

Trump added: "Today's ridiculous outburst only proves what I have been saying for a long time, that Ted Cruz does not have the temperament to be President of the United States."

The volley reflects the increasingly personal nature of the battle between Cruz and Trump. Earlier Tuesday, Trump had criticized Rafael Cruz, the senator's father, calling him "disgraceful" after he urged evangelical voters in Indiana to reject his son's rival.

Trump also referenced a report from the tabloid National Enquirer -- without naming the publication -- which alleged that it had identified Rafael Cruz in a photo with Lee Harvey Oswald months prior to the JFK assassination. CNN has not independently confirmed that report.

Trump is looking for a decisive win Tuesday in the Indiana primary that would establish him as the all-but-certain presumptive Republican presidential nominee. Cruz, meanwhile, is mounting a last stand in the Hoosier State, knowing that defeat would deal a nearly devastating blow to his hopes of stopping Trump from securing the 1,237 delegates needed to win the nomination on a first convention ballot.

On the Democratic side, front-runner Hillary Clinton is bracing for a tight race -- and a potential loss -- to Bernie Sanders. The Clinton campaign is already lowering expectations about its prospects in a state that won't change the contours of the Democratic race.

There are 57 Republican delegates up for grabs in Indiana.

Following his decisive wins in New York and other East Coast states, a victory in Indiana would put Trump within 200 delegates of the magic number he needs to clinch the nomination. And with a slate of favorable states, including delegate-rich California still to vote, Trump could have a clear path ahead. Still, he's unlikely to win all the delegates he needs until the primary season wraps up in June.

A loss for Cruz would raise major questions about his aspiration to force a contested convention that represents his sole hope of keeping Trump off the Republican ticket, since there are not sufficient delegates left to be awarded for him to catch Trump.

"If we win Indiana, it's over, they are finished. They are gone," Trump told cheering supporters at a rally in Carmel, Indiana, on Monday, taunting his rivals as he also lashed China over its trade policies, a key theme of the short, sharp campaign through the midwestern state that has lost blue collar manufacturing jobs to low wage economies abroad.

But Cruz, who has been touring Indiana with his family, his new vice presidential pick Carly Fiorina and the state's Republican governor, Mike Pence, insisted that his hopes of winning the nomination were still alive.

"I'm not going to get to it, but neither is Donald Trump," Cruz said, though he did allow that Indiana was looming as a crucial contest when he said earlier on Monday that he would stay in the Republican race as long as he had a "viable path to victory."

The Texas senator has tried everything to come out on top in Indiana, including his pick of Fiorina, an unusual move for someone who hasn't yet won their party's nomination. He also entered into a strained alliance with John Kasich that allowed Cruz to focus on Indiana while the Ohio governor devoted his attention to New Mexico and Oregon. Finally, he secured a late endorsement from Pence, but the governor also made clear that he respected Trump's historic campaign.

Trump leads the field with 1,002 delegates and going into Indiana needs to win just 47% of the 502 remaining delegates on offer. Cruz has 572 delegates and Kasich has 156. Neither man can now reach 1,237 delegates.

Indiana is not a classic winner-take-all contest on the Republican side. To win all 57 delegates, a candidate must win the statewide popular vote and the popular vote in all nine of the state's congressional districts.

Polls show the public mood is also shifting toward Trump --- 91% of Republicans surveyed in a CNN/ORC poll released on Monday believe that Trump will win the nomination. He also has a clear lead nationally in the survey -- 49% support among Republican voters to Cruz's 25%. Kasich had 19%.

Clinton was the top choice of Democratic voters in the CNN/ORC poll, with 51%. Sanders was on 43%.

A win for Clinton on Tuesday in Indiana, with 83 pledged Democrats on offer, would further complicate Sanders' rationale for pushing on to the end of the campaign in June and possibly on to the Democratic National Convention in Philadelphia in July. A Sanders victory, however, would provide a morale boost to his struggling campaign but do little to dim Clinton's prospects of becoming the Democratic nominee.

Going into the Indiana primary, Clinton has 2,179 of the 2,383 delegates needed to win the nomination, including superdelegates -- senior party officials and lawmakers who can vote however they choose at the convention. She only needs to win 20% of the remaining delegates at stake to formally capture the nomination.

Sanders has 1,400 delegates so far, including superdelegates, and he needs to capture 97% of the remaining delegates to overhaul Clinton. There are 1,016 delegates remaining to be contested in the campaign. Clinton leads Sanders in the pledged delegate count by 1,666 to 1,359 and and by 513 superdelegates to Sanders' 41.

The painful state of the race for Sanders means that his only hope of winning the nomination would be to convince Democratic superdelegates at the convention to abandon the former secretary of state -- an unlikely scenario considering that group is largely made up of party insiders long aligned with Clinton.

That is one reason why the Clinton campaign has begun stressing that it is time to unite the party and concentrate on the race against Republicans in the fall.

But the Vermont Senator used his public performances in Indiana to highlight what he says are stark differences on trade. He also rebuked her over her vote in 2002 to authorize the Iraq war, and demanded a $15 minimum wage.

"Let Indiana be the 18th state to join the political revolution!" Sanders said at a rally in Fort Wayne, Indiana, on Monday, as he battled to close a four point deficit to Clinton revealed in the NBC/Wall Street Journal/Marist poll.

The former secretary of state is increasingly turning her attention away from Sanders and setting her sights on her potential general election rival Trump. She was not in Indiana on the eve of the primary, preferring to roll through West Virginia instead, where the next primary takes place on May 10.

CNN's Chris Frates and Eric Bradner contributed to this story