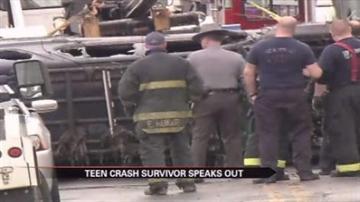 WARREN, Ohio -- Police say it is one of the worst accidents they have ever seen and for the first time we are hearing from one of the teen survivors.

Six of Brian Henry's friends died Sunday when their SUV hit a guardrail, flipped and landed in a pond.

"We hit the rail and I got knocked unconscious," said Henry. "The water was so cold, it woke me back up. Both of my feet were tangled in the seat-belt.  The car was upside down, so I had to pull myself up from the bottom of the car."

Brian says he had to kick the window several times before it shattered. Then, he and another teen ran for help.

Police believe the car may have been stolen and speed was to blame.

None of the teens were wearing seatbelts.