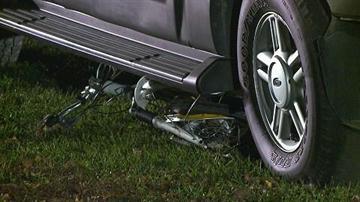 ELKHART COUNTY, Ind. - A teenager was critically injured after she was hit by a SUV while riding her bike.

The accident happened at 5:25 p.m. in Elkhart County, one mile east of Wakarusa.

Deputies identified the victim as Amanda Zimmerman, 15, of Wakarusa.

Yoder was driving a 2004 Ford Expedition.

The SUV suffered front end damage due to the impact. In photos taken at the scene you can see Zimmerman's bike underneath the SUV.

Zimmerman was airlifted from the scene to Memorial Hospital in South Bend.

As of 10 p.m. Sunday Zimmerman was listed in critical condition with head and internal injuries; she was not wearing a helmet.

The investigation is ongoing. No citations were issued at the scene.