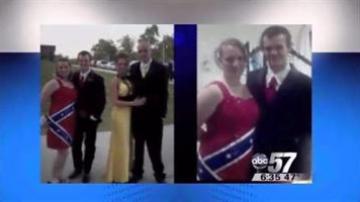 The teen was turned away from the dance after school officials deemed her dress racist. The teen had on a knee-length gown resembling a Confederate flag.

She even found the perfect accessory a rebel flag necklace.

"It wasn't done to offend anybody. It was done just for the sole fact that I just wanted a rebel flag dress because I thought it was cool,” said Texanna Edwards.

Other students at the school said they didn't think her dress symbolized anything negative. They said she was just embracing her heritage.