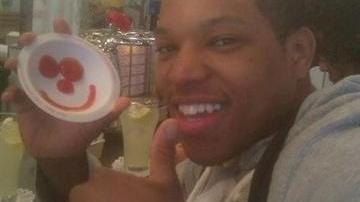 SOUTH BEND, IND. --  A young man is dead tonight after he was shot multiple times on the corner of West Ewing and Walnut St at Walkerfield Park.  Police identified the man as 18-year-old Christopher James Simril.

Prosecutor Dvorak says when police and ambulances arrived, they found the young man laying outside of a gold Pontiac Grand Prix.  He was rushed to Memorial Hospital, but he did not survive.  Neighbors are shaken up by the incident.

Grayson Poe lives right down the street from where Simril was shot to death.

"I seen the ambulance go by with a person in the back because I was up on the hill.

His mom sent him down to the tennis courts to see what was going on.

"She is just saying be careful and make sure you know what you are doing and stay close to the police officers", said neighbor Grayson Poe.

Poe says he just moved here and he can not believe this is the second time someone has been shot in his neighborhood.

"I am from Illinois, nothing like this really happens", said Poe.