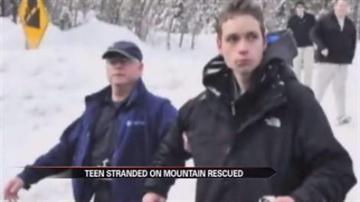 CARRABASSETT VALLEY, Maine. -- A Maine teenager is home safe after spending two days in freezing temperatures, alone, with no food.

Police say the high school senior got separated from his dad during a weekend ski trip. When he could not find his way back, he tried some survival tips from TV.

The teen built a snow cave, drank water from a stream, and followed snowshoe tracks until someone found him.

"I thought like most everybody that he was hurt, broke a leg or something like that. He was cold but for being in the woods for 2 days, he was in great shape," said Joel Paul, found missing skier.

His mom says he is doing well and the first thing he asked for was a cheeseburger.