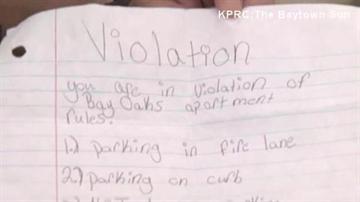 BAYTOWN, Texas -- A teenager in Texas turned the tables on a policeman by writing him a ticket when she saw him do something improper.

Baytown Police Officer Tommy King patrols the apartment complex in Baytown and keeps the criminals away.

Recently, he parked his car next to the leasing office.

Fourteen year old resident Annie James saw it, and didn't like it.

"He was parked on the side of the building. It said it was a fire lane all the way around," said Annie.

She wrote him a ticket because he was also parked on the curb and he didn't pull head-in to the spot. A rule that is clearly posted all over the property.

"I came to get my car and I saw a piece of paper on my windshield. I took it off, read it and started laughing immediately," said King.

Annie told Officer King he had to pay a $10 fine to the manager.

"I thought it was neat that she made it for $10 but she didn't make it to herself," said King.

King decided he was going to pay up, but in a better way.

Annie has never been to Toys "R" Us before. She moved to Texas just a month ago with her brother and father.

"Turns out we're both from Alabama and we ended up in Texas. Now I have a new friend. I think the lesson is not to be afraid of law enforcement, we're here to help," said King.