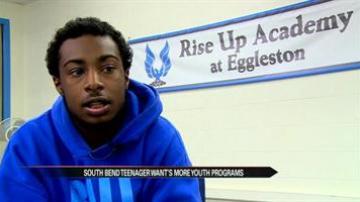 SOUTH BEND, Ind. -- One South Bend teenager has buried three close friends over the last month. Now he is challenging others to stand with him to create more activities for young people.

Bluthers Casey "Yung Blu" attended Nathan Hall's vigil. He has known Nathan since they were little.

He spoke out against the violence that is claiming the lives of his close friends and he challenged people to stand behind him and create more activities for young people.

Yung Blu was also friends with 19-year-old Cornell Taylor and 21-year-old Tyrone Kelly. They were both murdered in March. Nathan was murdered on April 16.

"After losing three of my friends in one month I've been hurting. And after I heard about Nate- I couldn't even cry no more. It was just a sharp pain on my chest," said Yung Blu.

Yung Blu is his stage name. He's a local musician working to finish his credits at Rise Up Academy.

But before he gets his diploma he wants a void to be filled in his community.

"I believe that the community leaders need to come out into the community more instead of waiting on someone to die. We need to hurry up and have them out here to put out these programs because we're lost. We have nothing to do right now," said Yung Blu.

There's is at least one city leader that is working to change that.

It costs money to fully fund the programs and expand them each summer.

The city can deliver on the money as long as someone makes it a priority.

"I'm waiting on an appropriation to come down from the mayor's office so we can go ahead on the council and vote on it," said Davis.

Yung Blu said this is his priority:

Brainstorming new programs to help keep kids occupied and out of trouble.

"That's what keeps me going is that I have to find my outlet and my outway. To get out of my situation that I'm in. And if we have more programs to help these kids find their full potential in life, I believe that we can actually reduce the violence," said Yung Blu.

One rec center is asking for about $10,000 for upkeep and expansion of these summer programs.

The rec center on the west side is working to come up with a dollar figure, but it will likely be similar.

Henry Davis Jr says it will take a few weeks to hear back if the bill is approved by the mayor's office.