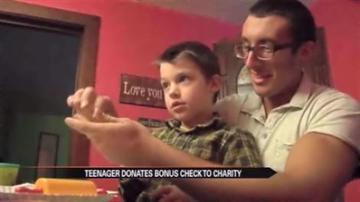 ANGOLA, Ind. -- A teenager from Angola, Indiana is giving back to his community following a reward for his hard work.

Erik Wentz works at the big box store in the small town.  After a year of hard work, he received a bonus which he immediately donated.

The 19-year-old gave a portion of his bonus check to a program that benefits women, infants and children.  The federal grant program provides nutrition, counseling and health services to families in need.

"If anything it's me thanking the community of people who benefit from it because they're the ones who work hard every day at the jobs that they do," said Wentz.

Wentz says his family has benefitted from that program so he wanted to help benefit other families and pay it forward.