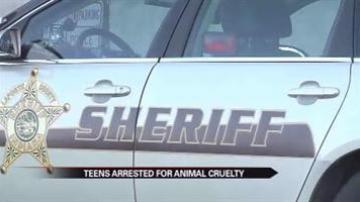 According to the LaPorte County Sheriff’s Office, the owner of the cattle said he was in his home when he heard about five gunshots just after 10 p.m. Wednesday.

Three dairy heifers, one pregnant, were all killed within 15 feet of the roadway.

The owner got into his vehicle and located a vehicle traveling slowly along County Road 425 West. He obtained the license number of the vehicle and turned it over to deputies.

That vehicle was located in the city of LaPorte by two sheriff’s deputies.

As a result of the investigation, two teenagers, one 17, one 14, were arrested and charged with three counts of killing a vertebrate animal and three counts of criminal recklessness.