Tensions escalating between U.S. and India 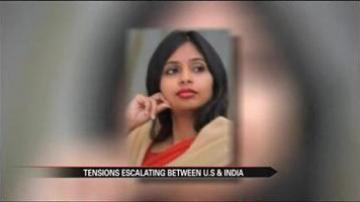 Tensions between two of the world's nuclear powers are escalating after an Indian diplomat was arrested on American soil.

United States prosecutors have charged Devyani Khobragade with falsifying visa documents. They also say she didn't pay her nanny minimum wage and forced her to work more than 40 hours a week.

Khobragade was arrested, taken to jail and allegedly strip-searched; a move that has India seething.

"She understands the deep insult that has been given to the Indian government by the conduct of the United States government against her," said Diplomat's attorney Daniel Arshack.

The U.S. attorney in Manhattan has ordered a report clarifying the details of her arrest and says officers did not handcuff or restrain her.

If she is found guilty of the crimes she is charged with she could spend 15 years in jail.