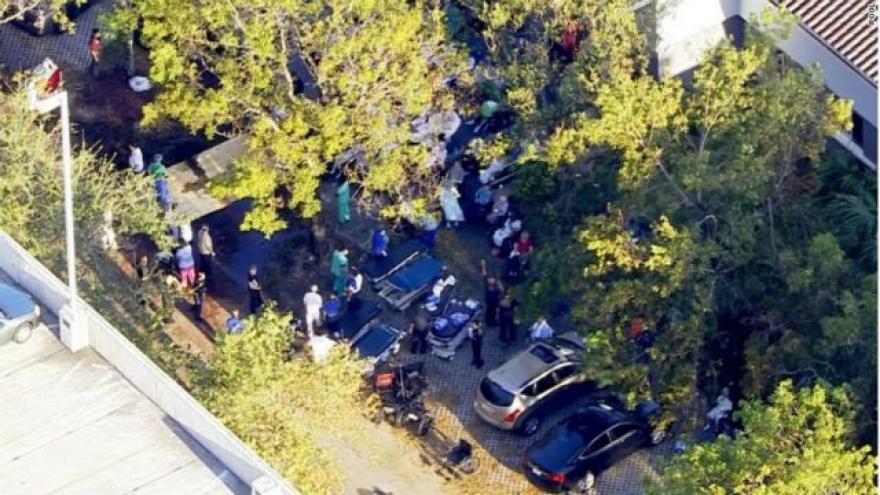 Ten victims have died after a Florida nursing home failed to evacuate its residents, who suffered for days in oppressive heat with no air conditioning, after Hurricane Irma, according to the Hollywood Police Department. Photo courtesy Pool

(CNN) -- Ten people have died after a Florida nursing home failed to evacuate its residents, who suffered for days in oppressive heat with no air conditioning after Hurricane Irma, according to the Hollywood Police Department.

A 93-year-old man died on Tuesday, and a 94-year-old woman died on Wednesday -- adding to eight who were found dead last week at the Rehabilitation Center at Hollywood Hills, or who died after being evacuated to a hospital.

The exact causes of death have not been reported, but a number of the 141 residents who were evacuated were treated for heat-related issues. An ongoing criminal investigation is underway.

Nursing home residents sweltered in hazardous conditions after Hurricane Irma, which felled a tree that knocked out the transformer powering the air conditioning system. Many were moved into the hallways, next to fans and spot coolers. One video obtained by CNN shows a naked woman sitting in the hallway on what appears to be a hospital bed.

Despite multiple calls between the nursing home and state authorities, at no time did the nursing home report that their patients were in danger or that they needed to be evacuated, according to a report on Tuesday by Florida Governor Rick Scott's office. The state advised managers "multiple times" to call 911 if such a situation arose.

"Something they failed to do," the 159-page report said.

"This facility is failing to take responsibility for the fact that they delayed calling 911 and made the decision not to evacuate their patients to one of the largest hospitals in Florida, which is directly across the street," Scott said in a statement.

Last week, the nursing home expressed its sympathy for the families of the deceased and said it is "fully cooperating with all authorities and regulators to assess what went wrong." A moratorium was imposed on the facility that prevents it from admitting any patients.

"This healthcare facility failed to do their basic duty to protect life," Scott said. "The more we learn about this, the more concerning the tragedy is."