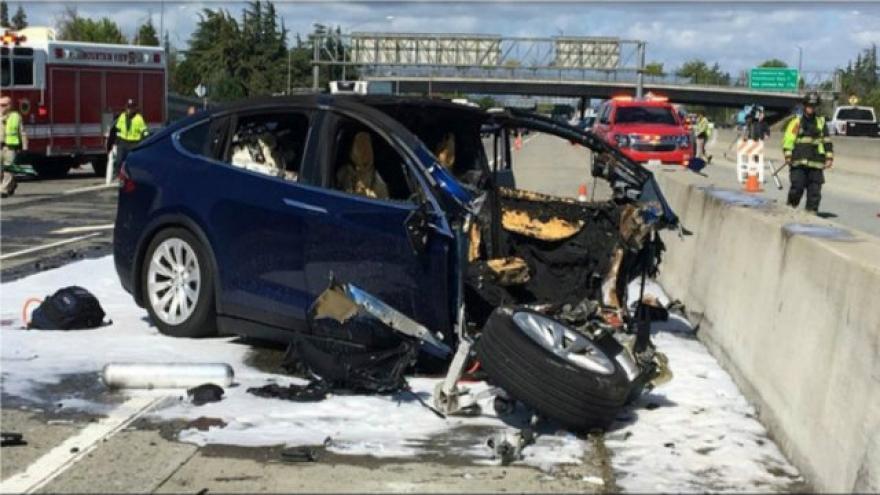 The driver was killed with a Tesla Model X, using the vehicle\'s Autopilot system, crashed into a highway barrier in California. Photo courtesy KTVU via AP

(CNN Money) -- The clash between Tesla and the National Transportation Safety Board is getting pretty intense.

At issue is the NTSB's investigation into the fatal crash of a Tesla that was in Autopilot mode.

In statement Thursday, Tesla accused the government agency of being "more concerned with press headlines than actually promoting safety."

The automaker and the NTSB have been trading jabs as to how and why Tesla was removed from a legal agreement making the automaker an official party to the NTSB investigation.

NTSB said Thursday that it removed Tesla from the probe into the March 23 crash. But Tesla had already announced on Wednesday night that it elected to withdraw from the agreement.

Tesla acknowledged that the NTSB warned it about making statements, but the automaker decided to comment anyway. Tesla said it wanted to "correct misleading claims that had been made about Autopilot."

The NTSB pointed out that automakers and other companies voluntarily enter into such party agreements and that it is important to control the flow of information in order to prevent misinformation and unwarranted speculation about ongoing investigations.

"The NTSB took this action because Tesla violated the party agreement by releasing investigative information before it was vetted and confirmed by the NTSB," the agency said in a statement.

In a letter sent to Tesla, the agency referred to statements made by the automaker "on or about April 10" regarding the crash. Tesla issued statements around that time stating that the driver, Walter Huang, wasn't paying attention.

"The crash happened on a clear day with several hundred feet of visibility ahead, which means that the only way for this accident to have occurred is if Mr. Huang was not paying attention to the road, despite the car providing multiple warnings to do so," Tesla said in the statement.

Tesla said it will continue working with the NTSB despite this disagreement. "Even though we won't be a formal party, we will continue to provide technical assistance to the NTSB."

The NTSB has not yet replied to Tesla's accusations about the agency's motives.

Tesla first posted about the crash on its Tesla.com blog on March 27, few days after it happened. The automaker noted that Tesla vehicles with Autopilot engaged had driven through the same area hundreds of times before without incident.

"Out of respect for the privacy of our customer and his family, we do not plan to share any additional details until we conclude the investigation." Tesla wrote in that post.

But then Tesla posted an update on March 30. In it, Tesla revealed that the driver had received several warnings to keep his hands on the steering wheel prior to the crash, according to computer and sensor data collected from the vehicle.

Tesla defended the Autopilot system in both posts. It pointed to U.S. government data indicating that Tesla's Autosteer system, which is part of Autopilot, reduced crash rates by as much as 40% compared to vehicles without it. But some critics say that study is oversimplified.

Tesla retains its party status in several other NTSB investigations involving Tesla vehicles, including the crash of a Tesla car that was operating under Autopilot when it drove into a fire truck in California.