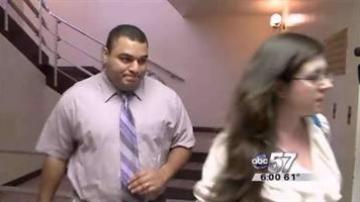 ST. JOPESPH COUNTY, Ind. – A 30 year-old South Bend woman took the stand on Wednesday to testify against South Bend Police Officer Jeffrey Chester. She said Chester touched her breast in exchange for not having the car she was driving impounded or going to jail.

When the victim was asked to identify Chester on Thursday in the courtroom she became very upset.

The victim said on that Friday night last September she was sitting in a parking lot by the East Race waiting for a text to meet up with someone.

"Sitting down there, listening to music, chilling," she said.

When she got the text she pulled up to the entrance to Northside Boulevard, where she said she saw a South Bend Police Department car.

She turned left onto Northside Boulevard and the cop car followed her and soon turned on the flashing lights.

She said the traffic stop happened at a corner near the intersection of St. Louis Boulevard and Wayne Street next to a church parking lot.

Chester told the victim she was pulled over for not having a visible license plate.

The victim told him that she had a suspended license and once he checked to confirm, she said he asked her to pull into the church parking.

"Let’s pull into this parking lot and discuss this matter further," recalled the victim on Thursday.

The victim said she pleaded with him not to send her to jail.

This is when the victim said Chester asked them to move again so of other officers responded they couldn’t see them.

She remembers him saying that he wouldn’t have a say if other officers wanted to arrest her.

She followed his police car out of the parking lot. The two cars traveled down Wayne Street, turned right on St. Peter Street and ended up in the back parking lot of Press Ganey parking lot.

She said they were completely hidden by the trees that lined the parking lot and the building.

This is where, according to the victim, Chester asked if she had anything on her.

She said no, he went through her purse with a flashlight, and asked her if she had a problem lifting her shirt to show that she didn’t have anything on her.

Then she said he asked if he could touch her breast since he had already seen them.

The victim recalled, "If I just grab your breasts, that’d be a way to keep you from going to jail."

She said she allowed him to, "I had to lift up my shirt and that’s when he grabbed my right breast."

The victim said he also leaned in and tried to kiss her. She said she moved out of the way.

The victim said during this part of the exchange Chester had her move next to the back of his car because this was out of view of the camera inside his police car.

"He told me his monitor wouldn’t pick me up from there," she said.

The victim said he told her not to tell anyone about it before he left the scene.

"He told me I held up my end of the bargain," she said.

The victim said she waited a few minutes and then got in her car and left.

On Tuesday another woman testified that Chester also touched her inappropriately during a pat down.

Testimony in the case will continue Thursday morning in the St. Joseph Superior Court.

The decision could be turned over to the jury by Thursday afternoon.