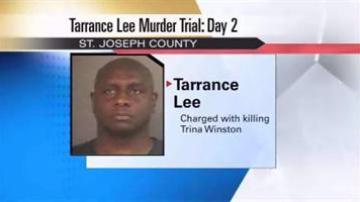 ST. JOSEPH COUNTY, Ind. -- Close to two dozen family members of Trina Winston were in court Thursday for the murder trial of her estranged husband Tarrence Lee. After watching the testimony, family members are confused why more people aren’t facing charges in her death.

"What kind of judicial system do we have that you can remove a body and you still able to be free to walk the streets?"  said Sharon Lax, Trina Winston’s niece.

Lax says she is frustrated after sitting through a second day of testimony in  Lee’s trial.

Lee is accused of killing Winston – and he may have had help disposing of her body.

Johnson says when they got inside, the group saw Winston’s body lying on a futon, covered with a sheet.

Johnson testified he helped Lee carry Winston's body from the apartment to the trunk of Lee's Buick. Tarrence’s brother Anthony served as a lookout -- and O'Neil left.

Johnson says Tarrence drove Anthony and Johnson to Chicago where they dumped Winston's body in the back yard of an abandoned house.

He said he was drinking heavily and doesn't remember much about that night, even though he told investigators during video taped interviews in Aug. 16. That his brother killed Winston and all three of them helped dump her body.

The victim's family said they are wondering if prosecutors cut deals with Anthony Lee, Johnson and O’Neil so they wouldn’t face charges if they testified against Tarrence.

Prosecutors are not available to make any comment until the trial wraps up. That could be as soon as Friday.