The dangers of rip currents 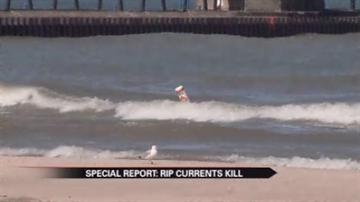 BENTON HARBOR, Mich. -- There are still a few weeks left until the unofficial end of summer in Michiana. Many families will head to Lake Michigan to savor the last bit of sun before Labor Day and when they do, they need to be aware of some real dangers that can lurk in the waters of St. Joe and Benton Harbor.

There have already been 20 reported drownings on Lake Michigan this summer, most of those in the southern coast near Silver Beach. Many coincided with strong rip current warnings and powerful waves.

One of the hundreds who lost his life in Lake Michigan since 2010 was 26 year old Alex Hines. He jumped off the St. Joe Pier last summer and never made it back out of the water.

His mom, Sarah Hines, said it’s still so tough to cope with his loss.

“I felt like if there is something out there it could have saved Alex’s life, it gets difficult sometimes just to think about if only they had something to save him,” said Hines

Witnesses that day said there was no one strong enough to jump into the water to save him and Hines eventually got pulled under by the strong current near the pier. His life in this instance was his own to save.

“I feel like if he knew what to do, he could have saved his own life, but he didn’t know what to do,” recalled his mother.

So what can you do to save your own life in rough water? We went in with a rescue expert to find out.

Bob Pratt is the director of education for the Great Lakes Surf Rescue Project. He suited up with ABC 57’s Kim Chappell and headed into the water near Tiscornia Park in Benton Harbor. A rip current warning had just expired shortly before they got in.

When looking at the water from the beach, it did not look threatening at all, but Pratt says this is when it will take people by surprise. And Pratt says it is all because of the nearby pier. It’s why 65 percent of drownings on the lake happen near a structure like a pier or jetty.

It is also why that age old advice ‘to swim parallel to shore and follow the current to safety’ works in oceans but not necessarily in Lake Michigan. Within in moment of Pratt and Chappell heading into the water, it was clear why.

“I can tell you right now that my legs are getting pulled left and right and this would be pretty scary right now if I did not consider myself a decent swimmer,” said Chappell.

There is a current pulling, sandbars causing depth issues and the waves in the lake constantly crash every few seconds. That’s when Pratt says panic can ensue.

Chappell asked him in the water, “If you are out here and you are uncomfortable at this point, what should you do?”

Pratt responded, “The biggest thing is not to panic. If you control the panic we can take some deep breaths.”

Then Pratt says to remember these three things because they could save your life: Flip, Float and Follow.

Pratt explained, “Control the panic, flip onto your back and float to see which direction the current is carrying you, then follow a safe path back to safety.”

After about twenty minutes of fighting these currents in shoulder deep water, Chappell and Pratt were both worn out.

Pratt says its conditions like these that cause drownings.

“The best situation here is not to come in the water and recognize that this could be really dangerous.”

Small kids or mediocre swimmers would be putting their life on the line and remember, there was no active rip current warning currently in effect.

“People would look at this and feel safe going in but they don’t know the power of the water underneath those waves.”

It’s a reminder than when the lake starts to churn that innocent lives have been lost and without knowing exactly what to do, yours could be next.

Pratt said there are a few other pieces of advice for people headed out to the beach, especially anyone with small children.

First off, throw some sticks into the water and see which way the current is flowing so you can anticipate the pull and which direction you might go.

Also, note how strong the wind is and if it’s blowing from the sand into the shoreline. If that is happening, a young child on a raft could get pushed out to deep water very quickly.

Lastly, parents should never be more than an arm’s length from their children in the water.