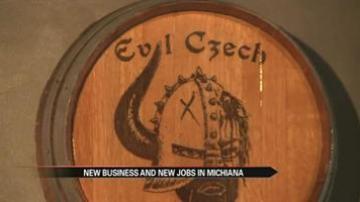 MISHAWAKA, Ind.-- The Evil Czech Brewery opened its doors Friday and they have already hired close to 70 employees. The General Manager said they had a great opening weekend.

The Evil Czech Brewery is working to open for lunch by April 1st.

Shawn Erickson said, “Why we chose to open it here? Rejuvenating the community was a big one and also the fact that beer is the new wine.”

Erickson said they are still looking to hire 10 to 15 servers.

“We really wanted to bring life back into the brewing culture, so that’s why we chose the old Mishawaka Brewery,” Erickson said.

The Inn at Harbor Shores said they are also looking to fill 140 positions and they have open interviews this Thursday and Friday from 9 a.m. to 4 p.m. at 499 West Main Street in Benton Harbor.

Lippert Components is hoping to lease the former A.J. Wright Distribution Center which will bring 180 jobs to South Bend in 2014.

The Stray Dog Bar and Grill in New Buffalo is looking to hire 100 more servers and bartenders for the summer.