The evolution of The Jack Swarbrick Show 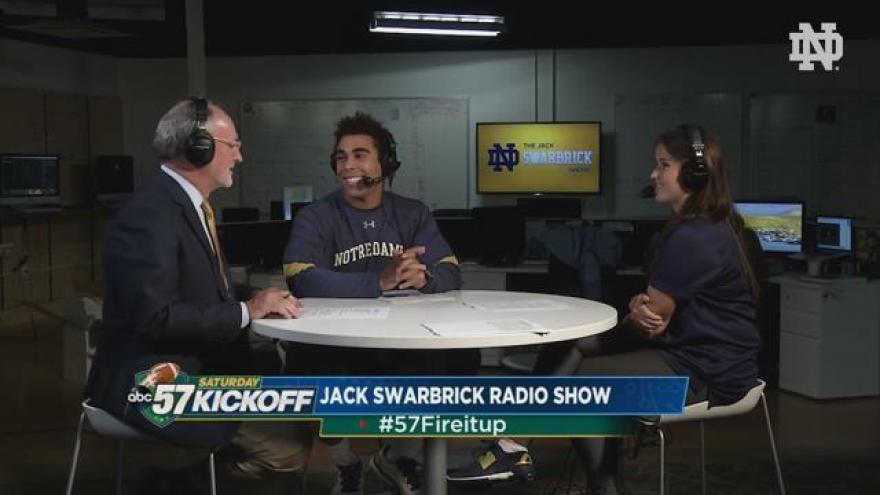 Notre Dame's Athletic Director Jack Swarbrick has changed the way Notre Dame is covered by the media not only with its partnerships with outlets like Showtime and Bleacher Report, but with his very own radio show.

"You know it's tough, it's tough especially since Iike I said he is the AD so you don't want to give him too much crap, but it's fun to bounce off of each other," said Notre Dame Senior Linebacker James Onwualu.

Swarbrick wants his co-hosts James Onwualu and Rachel Nasland to talk with him just like they would anyone else.

"Are they comfortable enough to give me a hard time? I want that by-play, I don't want those co-hosts deferring to me. I want them to have fun, yes, be relaxed and be able to go toe-to-toe," Swarbrick said.

The Jack Swarbrick Show has evolved from what he inherited when he took over the ad job.

Kevin White was the first Notre Dame Athletic Director to have his own radio show.

"We want to be responsible for telling the stories of the remarkable people that are here, especially the students who participate in varsity athletics and the coaches and our fans, so that's been the focus," Swarbrick said.

That approach has morphed into something pretty unique in college sports.

"Let's still do it but let's figure out how to create video content out of it. So we have a little bit of a TMZ-like approach. We're sitting around in a very relaxed type atmosphere, people are walking behind us. It's an active media room, but it captures the atmosphere I want," Swarbrick said.

"I sit in a seat where there's a TV right over there, so sometimes you'll catch me peeking at ESPN, some of the highlights. I try to stay focused but it's hard when the TVs are going around you. And people are making highlight videos over here, some people are talking on the phone over there, especially when you're new to it, it's hard to not get distracted," Onwualu said.

Neither of Swarbrick's co-hosts have any experience with this sort of thing.

"I'm actually a Finance major. No, it's totally different for me. It's a whole new experience which has been fun and I feel like I'm warming up to it every week," Onwualu said.

Both are making the most of the opportunity and taking advantage of being able to give each other a hard time.

"She keeps her ideas out of it because we jump on her if she says something wrong, but she's a great co-host and it's fun to do it with her," Onwualu said.

"I keep telling James I want him to let me pitch to him," Nasland said.

They say that maybe the best part is getting to know one of the most powerful men in sports and just calling him Jack.

The Jack Swarbrick Show has gone from a radio show that aired in South Bend, Chicago and Indianapolis and has evolved into a podcast and web show that you can find on und.com and WatchND.TV.