The Fighting Irish knock out Liberty in NCAA Tournament 74 - 43 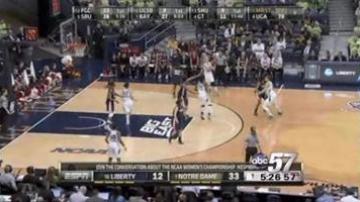 NOTRE DAME, Ind. -- Irish eyes are smiling tonight! The Notre Dame women knocked Liberty out of the NCAA tournament 74 to 43 Sunday, clearing the way for the Irish to make another run at the national championship!

Notre Dame has never played Liberty at home or met the team during the NCAA tournament, but in the two times they have ever played the Lady Flames they have never lost and today was no exception.

It is hard to do, but Kayla McBride stole the show today, leading the team with 15 points despite the fact that this is the first NCAA tournament game she has ever played in.

"I was a little nervous and anxious at the beginning of the game but as soon as that first basket went in I was like, OK let's just play the same game we have been playing all year.

The sophomore guard was not alone, Natalie Novosel put up 12 points and Devereaux Peters was right behind her with 10 points.

"I thought we exploited a lot of the mismatches that we had in particular, with the switches and stuff like that and I thought we did a good job executing our plan and tempo from the beginning," says point guard Skylar Diggins.

Notre Dame Head Coach Muffet McGraw says rebounding was the big focus going into today's game. Liberty is known for dominating the boards and has a huge inside presence, but Notre Dame accepted the challenge out-rebounding the Lady Flames in both halves.

The practice paid off, Diggins made a huge impact on the boards. The point guard grabbed nine rebounds and she says this game was good preparation for what the team can expect during the match up against Cal in the second round.

"They're a good rebounding team and so is Cal. So, it was a huge point of emphasis in practice this week and I think we have to continue to do that in order to win games," Diggins.

The Fighting Irish will hit the floor against Cal Tuesday night at 7 p.m., but Notre Dame has more than just a home court advantage. Today's blow out allowed the team to rest their starters and bring in the bench to finish the game, something Cal did not get to do during their nail-biting win over Iowa.

While the Fighting Irish were busy taking care of business on the court, emergency responders were busy outside the arena.

An elderly man was in the men's restroom when he suddenly had a fatal heart attack. The man is a huge Notre Dame women's basketball fan and had been cheering on the Fighting Irish just moments before.

The sad news quickly spread to the team.

"I just want to say that our thoughts and prayers are with the man, one of our fans who had a heart attack today during the first game and I just want to let the family know that we are thinking about them at this time," says Head Coach Muffet McGraw.

"I think we play this game for our fans and we give them a show all the time and I think he is looking down on us right now saying he is proud of us. So, I'm glad we got a win in front of all our fans," says Skylar Diggins.

The team say they appreciate every single one of their fans and say this fan will truly be missed by the Fighting Irish family.