The Irish win at home against the Trojans 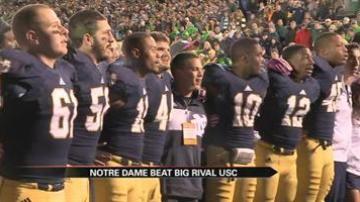 This win also ends a five-game home losing streak against the rival dating back to 2001.

The Irish held off USC Saturday night even after losing Quarterback Tommy Rees due to an injury.

Rees left the game with nine minutes left in the third quarter.

Head Coach Brian Kelly said Rees is going to be a little sore.

"Yeah, he had a neck strain. He got hit, and they wanted to bring him in for more observation.  He's really sore.  We'll know more as we kind of move through the next 24, 48 hours," said Coach Kelly.

Coach Kelly says they are taking it day by day with Rees.

"It means a lot, definitely a good feeling to go out on top against USC three out of four years we've beaten them, and the last time at home they got us.  Being able to leave as a senior with that win against USC at home, it feels good," said Wide Receiver TJ Jones.