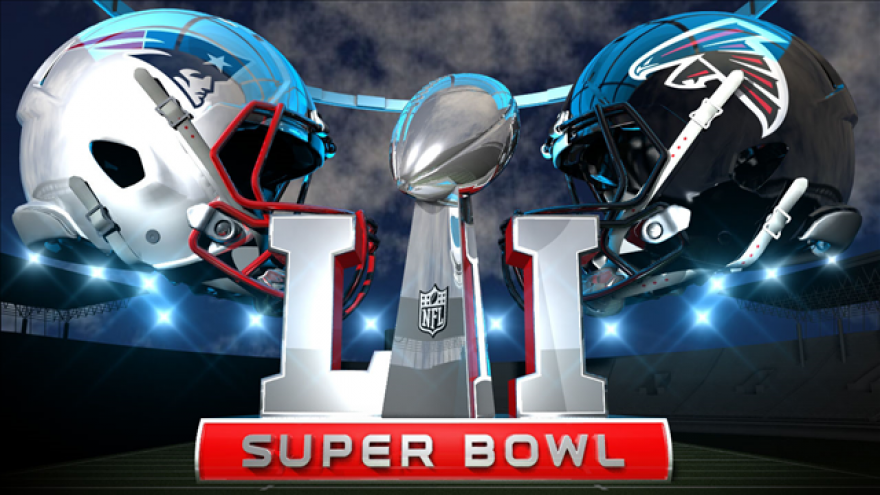 The Patriots made their ninth Super Bowl appearance, while the Falcons played for just their second time on the NFL's biggest stage.

The Falcons dominated the first half, with the Pats just making it on the board before the time ran out.

Matt Ryan with a 19 yard scoring pass to Austin Hooper brought the Falcons to 14-0.

Late in the half, Atlanta's Robert Alford with an incredible pick 6 and 82 yard run for the TD. Falcons up 21-0.

With two seconds left in the half, New England makes it onto the board with a field goal. Pats 3-21.

Matt Ryan 6-yard pass to Tevin Coleman and the kick from Bryant is good. Falcons up 28-3

With just a few minutes left in the 3rd, Brady completes a 5-yard pass to James White but the extra point is no good. Patriots 9-28

Patriots open 4th quarter with another field goal- 33 yards by Gotkowski. Pats up to 12-28

6 minutes left in the game and a Patriots comeback gains momentum. Tom Brady 6 yard pass to Danny Amendola is good for the TD and J. White rushes up the middle to get the two point conversion for New England. Patriots 20-28

Pats continue to mount their comeback with another TD and two point conversion, tying the game 28-28.

End of the 4th, Falcons and Patriots tied 28-28 and the game goes into the first ever Super Bowl overtime.

Patriots with the ball first in OT and James White scores a final 2 yard run for the TD and the win. Patriots triumph over Falcons 34-28.