The 'Right to Try' bill could save lives 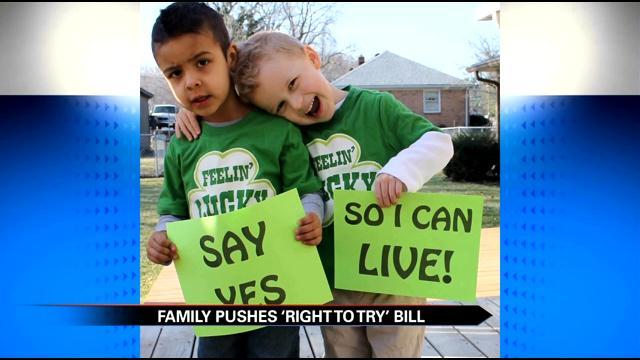 Indiana lawmakers are considering the Right to Try bill. Similar versions of it have already been passed in a few other states, including Michigan.

The bill would allow terminally ill patients the chance to try experimental drugs.

For Jordan McLinn, a five year old boy who doctors say won't live much past 20 years old, this bill being passed means more options for Jordan and his family.

Right now, he's like any other 5 year old, but in about 5 years Jordan's doctors expect him to be wheelchair bound.

Laura McLinn, Jordan's mother, said "muscular dystrophy is 100% fatal. The type Jordan has is the worst one."

Which is why his parents are pushing for this Right to Try bill to be passed in Indiana.

But not all Indiana lawmakers are sure that this bill is a good idea.

Senator Liz Brown said "that would really be a concern of mine. For example, if Jordan or somebody were to try one of these drugs but then someone is selling the fake version of it and someone else hears of it and thinks that they can get it faster and cheaper through these 'fly by nights' and they're not even really participating in 'the Right to Try,' I could see them taking advantage of it."

But Jordan's parents can only see the positive possibilities. There are currently experimental drugs out there that could keep him walking and living longer; potentially adding years to their son's life.

The Senate committee will vote on it during the second week of March. From there it heads to the full Senate for a vote.
Share this article: