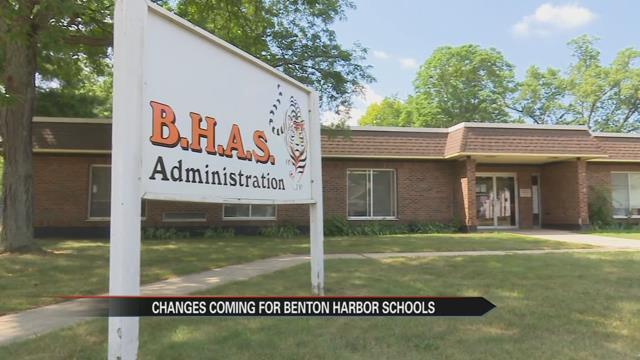 In an exclusive interview, Dr. Shelly Walker discusses transitions, changes and expectations for Benton Harbor Area Schools ahead of the new school year.

When asked if she could explain why the first-year high school principal had been placed on leave in June,” Dr. Walker said, “No, I think that, you know, some matters of private nature...privacy nature…rights of privacy, you know, he is on administrative leave.”

Walker did confirm Triplett is still being paid while on leave, but she would not say what led to the decision to place him on leave, or if there are any investigations taking place because of it.

“I think it’s appropriate to say that with him being on administrative leave, we need to just respect that,” Dr. Walker said. “And I’m going to ask you to allow me to not try to answer questions related to that situation. I want to respect the situation. I want people to be informed, but I have to be respectful.”

This situation comes in the midst of a series of changes the school district is undergoing.

The city’s pre-k center will be open this year.

For students in kindergarten through second grade, the International Academy at Hull school will be home, with newly-hired principal Jennifer Roy coming in from Arizona. She’ll also be implementing a dual-language program at the school.

Third through fifth graders will call the M.L.K. S.T.E.A.M. School theirs, under the leadership of newly-hired principal David Van Dyke from Indiana.

And Benton Harbor High School students will now have Don Pearson as their interim principal.

The district is also reopening its old kindergarten center – creating and ‘alternate school of choice’ for students who went to the Dream Academy Charter School that closed last year.

Dr. Walker said she’s excited about the changes, and said she’s confident they will help achieve the district’s goal.

“The path is improving the academic achievement of our kids in a safe and orderly environment, to allow them to be productive citizens,” she said.

And she invites all Benton Harbor families to a back-to-school event being held at the high school on August 24 from 11 a.m. to 7 p.m.

As for Triplett, ABC57’s Taylor Popielarz spoke with him at his home on Wednesday. Triplett would only speak through his closed front door, but he said he has “no comment” about why he is on leave.