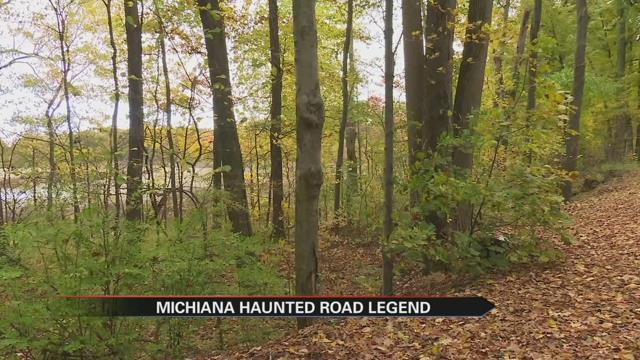 It's a legend that's been passed on through families.  Primrose Road in South Bend is thought to be haunted.  Many won't go near the area at night for fear of what can happen.

Stories of a disappearing farm house, a lady in a white nightgown, and strange things that happen to one's car when driving on this road at night, have been told across the area.

Lisa Driver and her husband Steve are members of the Michiana Paranormal Investigations group.  They say there's a reason these stories circulate about Primrose.

"I think the big draw of Primrose is the ambience," says Driver. "You've got trees. You've got no light.  You have swamps, woods, scary noises from animals. There's a whole lot here to get that blood going.

There hasn't been any documented evidence that this stretch of road leads to some creepy things.  But with popular television shows that explore paranormal activity across the county, ABC57 had to ask the question: what is the fascination?

Steve Driver explained.  "No one really know what happens when we die.  That's a huge mystery and a huge question," he says. "People are afraid of the uncertain.

He also thinks people thrive on the adrenaline that come with getting scared. Even more so during this time of year.

Halloween, while a holiday typically known for costumes and candy, has a paranormal background.

"It was believed that [October 31], the veil between our world and the world of the dead was at it's thinnest," Driver says. "That spirits good and bad could actually make that transition into our world.

But the Drivers say, there's nothing to truly be scared of.

Both have been doing paranormal investigations for a long time, and have never felt that they were in any serious danger.

Lisa Driver says it's important for people to know what they do.  Members of the Michiana Paranormal Investigations all have full-time jobs, and don't accept any money for their work.

Driver explains it's all about helping people, and that's why she does it.

"I try to use my knowledge because there's a lot of people out there that are being haunted," she says.  "They're scared and they don't know what to do.  Because you can't just call someone and say, 'I have a ghost.''

Regardless of the believers and non-believers, the legend of the stretch of road on Primrose, will continue to live on.