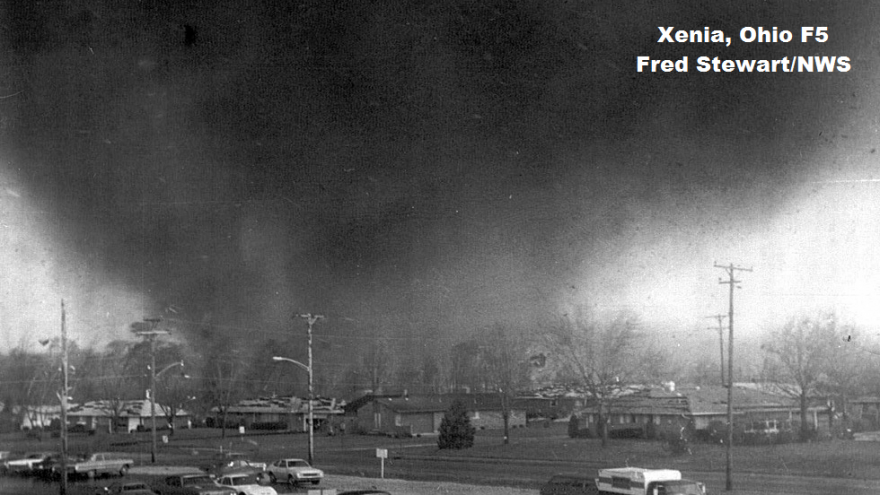 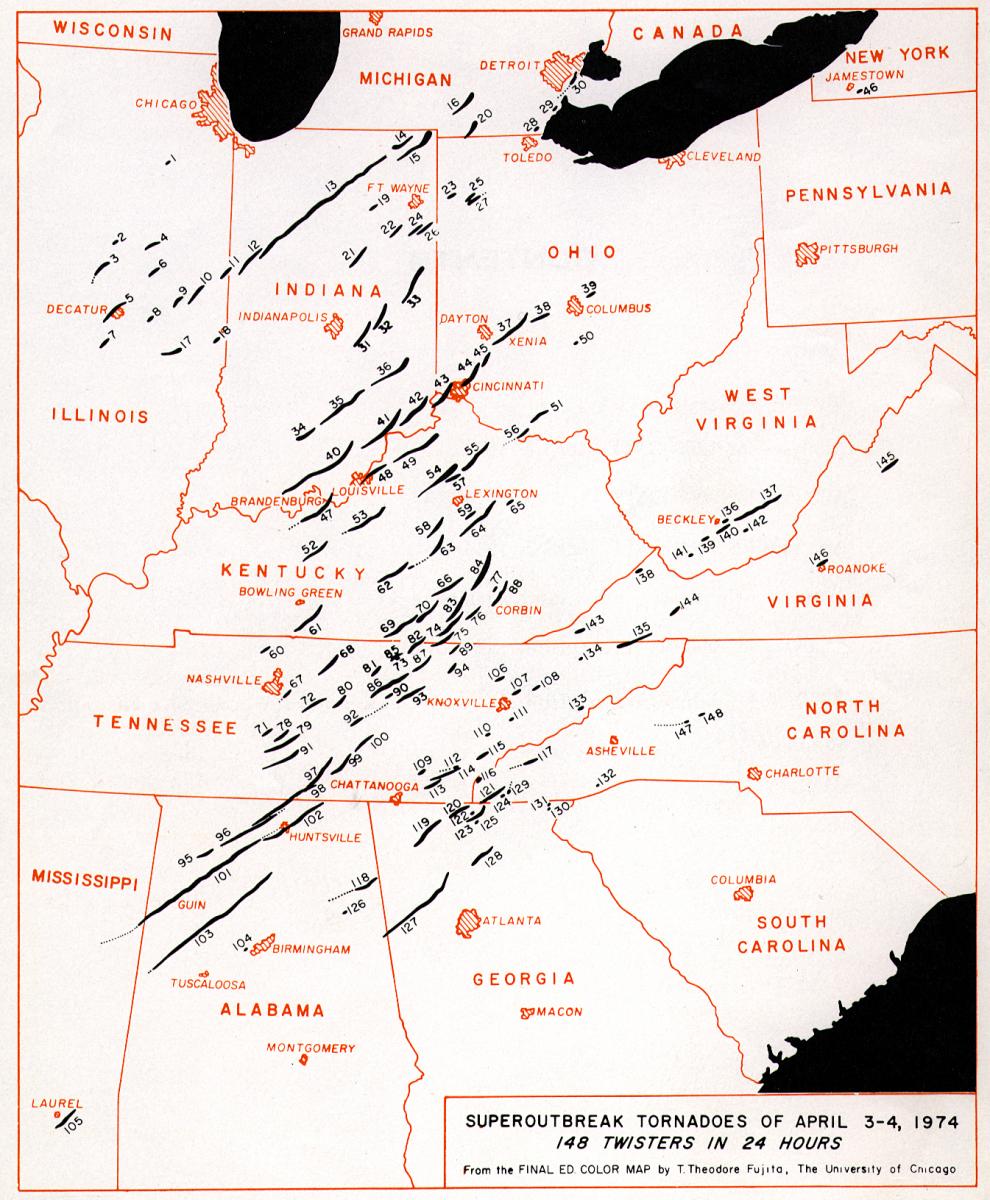 All 148 tornadoes and their path from the Super Outbreak of April 3-4, 1974. Dr. T. Theodore Fujita of University of Chicago
April 3-4 of 1974 will be remembered as the dates with the worst tornado outbreak of the 20th century, and the second-worst of all time. A whopping 148 tornadoes touched down across 13 states and Canada. Of those, 19 impacted Indiana and 6 impacted Michigan. What made the event so significant is there were more "strong" (F2+) tornadoes than weak ones. The breakdown of tornadoes goes as follows:

It is unheard of to see a combined 30 tornadoes rated F4 and F5 with one event. For perspective, all of the F4 and F5 tornadoes from the event had winds of 207-318 mph. That is what you call catastrophic. 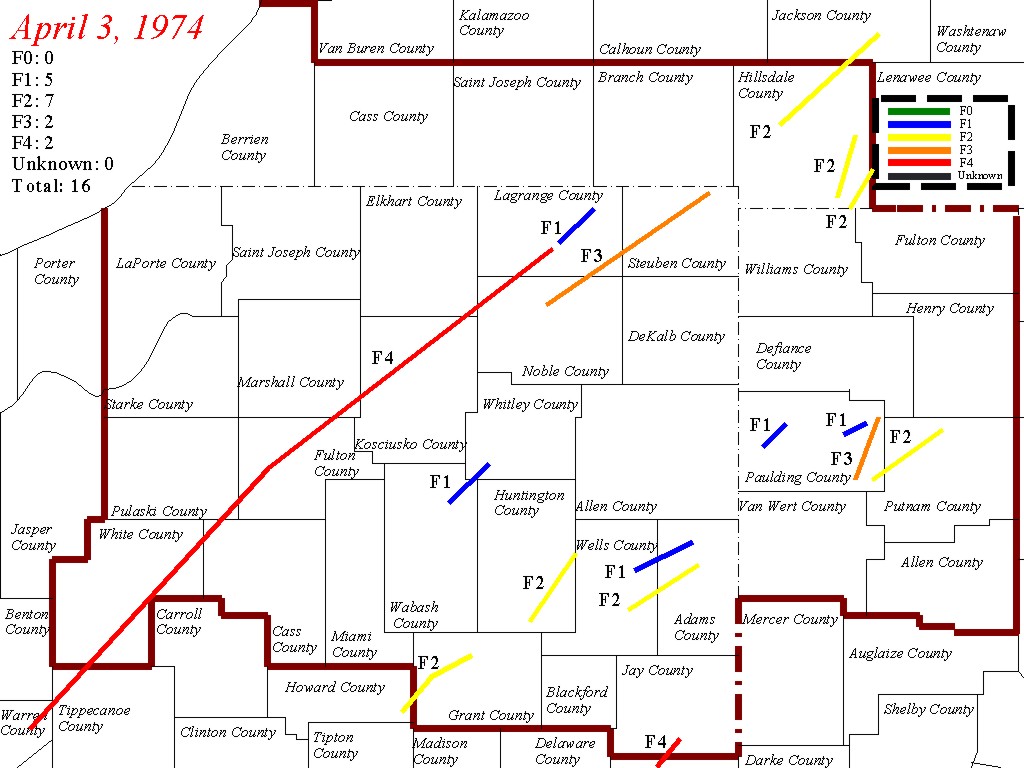 Tornadoes that struck Northern Indiana, Southern Michigan and Northwest Ohio. National Weather Service
The tornadoes all happened in less than 24 hours and had a combined path length that stretched over 2,500 miles! In the end, 315+ people were killed with more than 6,000 more were injured, per the National Weather Service. While Michiana was only impacted by three tornadoes, one of them was extremely large (up to a half-mile wide) and intense. It's referred to as the "Monticello Tornado" and was one of the most destructive tornadoes of the outbreak. It also had the longest path of any of the tornadoes as it tracked 121 miles from White County to LaGrange County, ravaging everything in its path. Winds maxed out between 166 and 200 mph with Monticello being the most severely affected area. 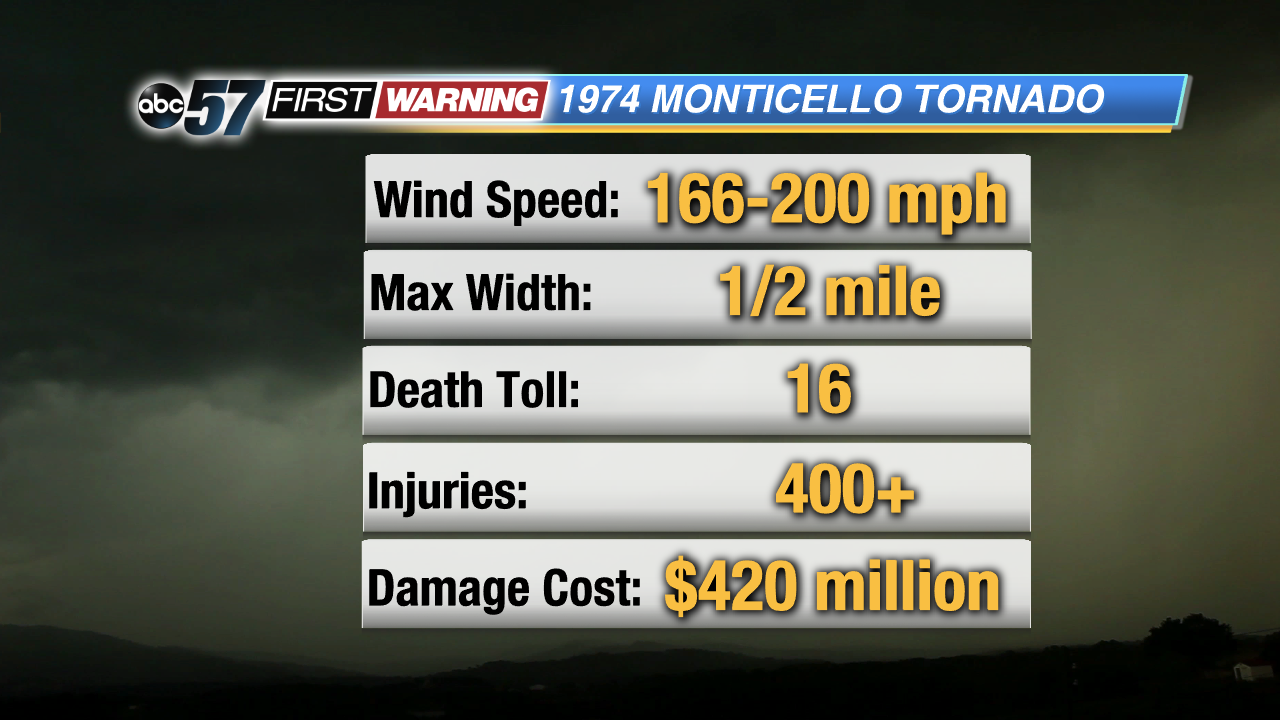 Monticello tornado facts. National Weather Service
Other locations heavily hit by the twister include parts of Fulton, Kosciusko, Noble, and LaGrange Counties. Rochester, Talma, Atwood, Leesburg, and Ligonier were hit particularly hard. The tornado killed 19 people, with six of those coming in Fulton County and one in Kosciusko County. 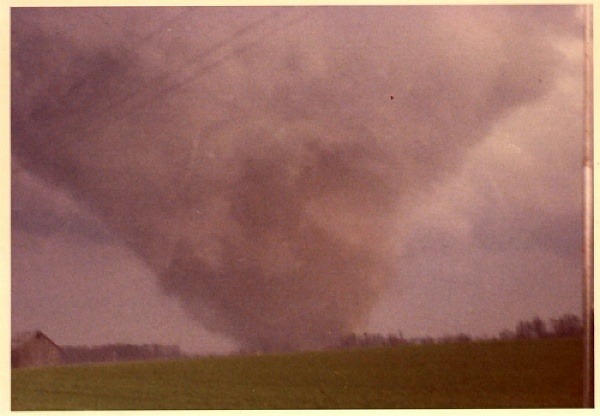 The outbreak as a whole caused a 2019 equivalent of roughly $4.6 billion in damage. The event began around 1 p.m. on April 3rd and didn't culminate until early in the morning on April 4th. That's when the last tornado of the outbreak lifted in North Carolina. For more information on the 1974 Super Outbreak, try these links:

•Overview of the outbreak

•Great map collection of the event